We have seen a few iPhone accessories recently including the Cool iPig docking station, now we are moving onto something a little… Different. Have you ever wanted to be able to control something with your smartphone? Well now you can, think of this as the pet ball for your smartphone.

You can control the “Sphero” using a smartphone’s Bluetooth such as an iPhone or something along those lines. You might be wondering how it works and also why would you want to do it? The device is made by a company called Orbotix and it is basically a little robotic ball that will communicate with your smartphone’s tilting functions and make the ball move. You can see that in the video at the bottom of this article courtesy of Engadget.com. 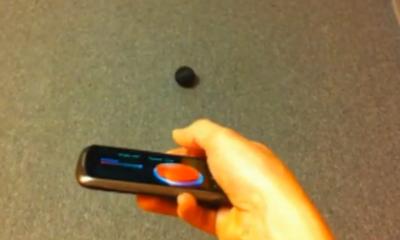 The Sphero will be appearing at the 2011 Consumer Electronics show, you can read a little more about it from the official Orbotix blog here. They say that the idea of it is to be able to play a game with it, like challenge a friend to go through a maze or to get two of the Spheros and have a Sumo fight against one another. These are some great ideas but I can see other things copying the idea soon.

Can you imagine having a racing car that worked in a similar fashion? Imagine being at home making little tracks for you and your friends to compete against one another, it would be like real life Micro Machines!