The start of the Chinese New Year or the Lunar Year has finally arrived and as a way to commemorate the celebrated occasion, Dead Zebra has launched a range of special edition Android toys complete with traditional oriental style designs.

The retailer is known for producing the Android mini-collectibles in association with Google and has a whole range of different styles available from the standard edition green Android figurines to the Android mini-collectible series which features the bright yellow High-Voltage and CopperBot Androids. Last year they launched one limited edition Android, God of Wealth, to commemorate the start of the Chinese New Year but this year a whole set will be available.

The new special edition range will feature three Android toys, each representing different aspects of luck; Longevity, Blessing and Fortune. They are primarily aimed at the Asian market although a limited batch will also be available in the US. They are on sale now in sets of three for $29, bargain considering how limited these collectibles are. They aren’t expected to be on sale long either so be sure to get in early if you want to get your mitts on them.

Every year over a billion people celebrate the start of the Chinese New Year making it one of the biggest celebrations in the world. this year is more special for a lot of people celebrating as it is the year of the dragon, a mythical creature that is regarded for many as the most important of all the animals and creatures that are represented in each Chinese Year.

What do you think of these special edition Android collectibles? Will you be trying to get one? Which animal in the Chinese New Year represents your birth year? 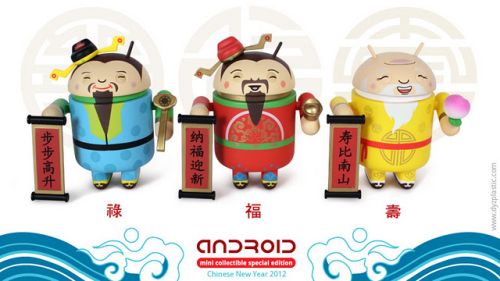