Xbox 360 owners in the US were left feeling rather disappointed recently, after they discovered that the upcoming Warriors: Legends of Troy game would not be released on the Xbox 360 in their region and would instead be launched as a PS3 only title.

As Jim H over on thesixthaxis.com website recently reported, a number of fans noticed that the game’s official webpage (here) had changed, and all the Xbox 360 logos had been removed. The link in which they could pre-order the Xbox 360 version had also been removed.

Although the Xbox 360 version has been canceled in the US, it appears that European and Japanese gamers will still be able to buy both the Xbox 360 and PlayStation 3 versions of the Koei Canada-developed Hack and Slash title when it arrives in March. 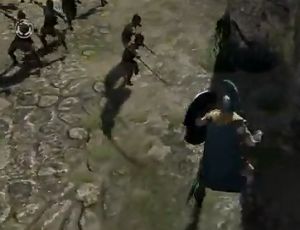 As noted on the us.playstation.com website, the Warriors: Legends of Troy game will enable gamers to do battle as the Trojans or the Greeks, and the two unique storylines will allow players to view the war from the two different perspectives.

You can check out a trailer for the upcoming game via the YouTube link here.