We have some great news for those of you planning to pick up the impressive-looking but very much elusive Sony S1 tablet, as we have a brand new live video of the device to show you now, giving you a detailed look at the customized Android 3.0 Honeycomb interface that is featured.

Although the S1 along with the S2 have already been officially announced by Sony, details are still pretty scarce on the device, due to Sony’s seemingly laid back approach to not show the device until the very last moment.

The S1 is not out until sometime in September and many consumers are eager to see what kind of PlayStation features it will offer exactly, since Sony are touting it up as the first tablet in the world to be officially PlayStation approved, joining the likes of Sony’s other gaming equipment on the market such as the PS3, PSP and upcoming PlayStation Vita handheld.

The good news for you, is that we have a video to show you now which shows you the latest build of the S1, but more importantly – a solid look at how Sony has customized Android 3.0 Honeycomb with their own visual preferences. It looks like they have kept things pretty simple and we like what we see.

However, as you delve deeper into the video, you’ll see that the PlayStation Suite that Sony recently unveiled is there in full view and we see things like a Green Hornet video trailer, a shortcut to the Crash Bandicoot PS1 game and a web browser shortcut amongst other things. It’s a shame the commentary is in Italian, but it gives you an idea that Sony will be separating their S1 tablet to provide specific features for those that just want to use the tablet device for standard multimedia features, and for those who are buying it solely for it’s gaming capabilities.

Speaking of gaming capabilities, it will definitely be able to handle some serious gaming grunt, thanks to the included 1Ghz NVIDIA Tegra 2 dual-core processor, although we’re not sure what amount of RAM this device will run on yet – we’ll let you know when we find out. Another important factor of course is price, and some consumers may be fearing that the S1 will be slapped with one of one Sony’s infamous premium price points, as they have known to do with other multimedia devices in the past.

We like the unique design though and the fact that this is touted as the first proper gaming tablet on the market. Let’s see if it delivers this September. Watch the video below and let us know if you are planning to pick one up or not. Will Sony redefine tablet gaming with the S1 and make gaming on the Apple iPad non-existant? It’s going to be an interesting battle for sure, one which we will be analysing in due course. 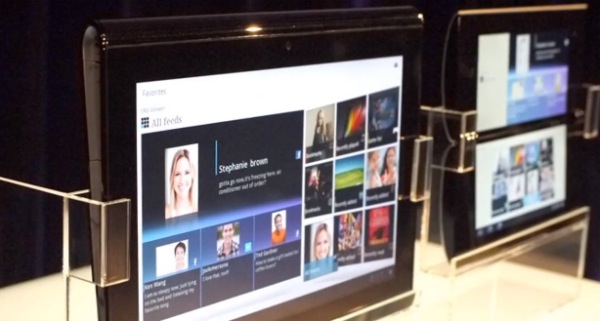