At the beginning of October we learned that Sony were to introduce four new TV sets; what made these different was the fact that they had Google TV built in. However, we also learned that there was a Sony Blu-ray player, which also had the same option.

The four models are as follows NSX-24GT1, NSX-32GT1, NSX-40GT1, and NSX-46GT1. It is hard to say how popular these new TVs will be, but with Google and Sony working side-by-side, it is hard not to see why this will not become a huge success.

Prices for the TVs are between $600 to $1,400, and go from 24 inches to 46 inches. For those of you on a cheaper budget, then you could consider the stand-alone device, the NSZ-GT1, for a complete guide to this device visit OSM. 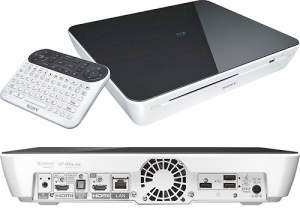 If you do not wish to purchase any of those devices above, then why not consider the Logitech Revue set-top box. This will allow you to gain access to Google TV for just $300, that’s $100 cheaper than Sony’s NSZ-GT1 — although that is also a Blu-ray player. For a full review of the Sony Internet TV with Google TV visit Engadget.

I do not plan to purchase any of the above; as I still hold out hope that Sony will bring Google TV to the PS3.