The Sony Xperia Z3 was released in most markets last month, and has proved a popular handset in a short amount of time. However, as yet, there is no US release, but that will change on October 23rd, as the new handset will be heading to Verizon under the name Sony Xperia Z3v. It is every bit the same as the international model, apart from a few tweaks to the hardware, which means the same cases can be used to protect it.

We know there is no need for a waterproof case, seeing as though this handset already has that covered, but you may still wish to look for a rugged cover in order to protect your Sony Xperia Z3v from shock, or if you are likely to scratch it. This is where the Sony Xperia Z3v Tough Case Mate comes in, more details of which can be seen below. 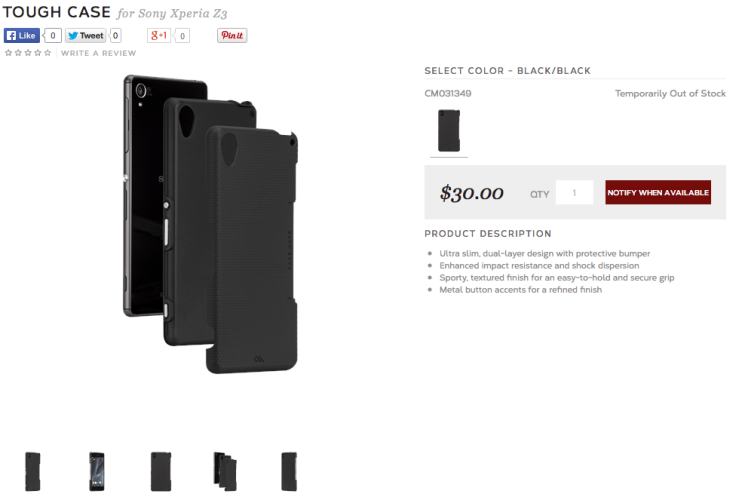 There is no need to search for a case specific to the Sony Xperia Z3v, as any case for the Z3 will be compatible, making your job much easier. We decided to single out the Tough case because this was a popular model for the Z2, and so it stands to reason people may want the latest version of this case.

Tough Case for Sony Xperia Z3 and Z3v is ultra slim with a dual-layer design, which also adds shock protection. The case has been enhanced for impact resistance and shock dispersion, and its textured finish makes it less likely to slip from your hands. To help give the case a more premium look it has been finished with metal button accents.

Availability and price – This Tough Case from Case Mate is temporarily out of stock, although this has something to do with the US version of the Sony Xperia Z3 not on the market yet. However, you will be notified when you can purchase the accessory, where you then have the option to pay $30 to take procession of it.