Many of you may be waiting for the arrival of the Nexus 9 release date as your next tablet purchase, but Sony has sent a message to the world this week by telling everyone that they are still a dominant force in the tablet market.

The Japanese electronics giant has just announced the Sony Xperia Z3 phone but we wanted to remind you that they also have a new tablet on the way – the beautiful-looking Xperia Z3 Tablet Compact.

This is going to be Sony’s new flagship tablet and the 8-inch size is going to be perfect competition for Google’s Nexus 9 when finally announced and of course any new iPad Mini 2 tablet that Apple brings to the table next week during the Apple September 9 announcement.

Everything looks spot on with this upgraded tablet. Not only are the Xperia Z3 Tablet Compact specs impressive with the likes of a 2.5GHz quad-core Qualcomm Snapdragon 801 processor and 3GB of RAM powering the device under the hood, but it also houses one secret feature to cater to all the gamers out there. 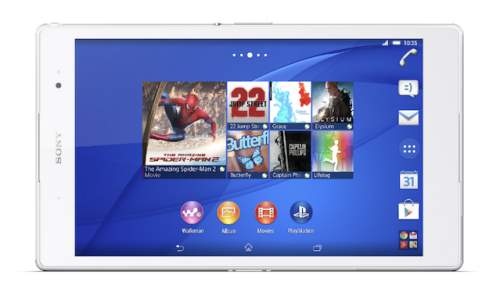 The Xperia Z3 Tablet Compact is actually going to be Sony’s first tablet that is officially compatible with the PS4 with Remote Play. Users will be able to navigate through the PS4 using the tablet and also use it as a second screen on PS4 games which support this feature – Battlefield 4 Commander as one previous example.

This is potentially a massive feature that Sony can offer, just imagine the scenario when you can be away from home but browse through the entire PS4 homescreen on an 8-inch tablet and queue up downloads as you please.

It also means that when your TV is in use, you can simply hook up the PS4 to the Xperia Z3 Tablet Compact, as well as the DualShock4 controller to continue gaming on a smaller screen in style.

One of the other most impressive features for us is the addition of a massive 4500 mAh battery. Sony promises up to 15 hours of HD video playback with this battery, while those using the tablet for the PS4 function should be able to get a solid session as well.

There’s no information on pricing yet, but Sony has said that it will be available this Fall both WiFi and LTE versions of the tablet. Let us know if you are interested in picking one up ahead of any new iPad or Nexus 9.