One smartphone that caught the eye of a number of tech fans at CES had been the Sony Xperia Z, and a few of our readers commented on how this phone impressed them the most so far. While this wouldn’t be the case for the majority of our readers, especially considering the amount of smartphones being introduced at CES 2013, we wanted to feature some Sony Xperia Z visual reviews taken after a hands-on at the event and also a detailed technical visual that explains the finer details.

We will also list the full Sony Xperia Z specs and main features on this page, so if you know these already then skip to the hands-on videos to see a close up with Sony’s new smartphone. You can read about the battery life potential in this article that we published shortly after the reveal at CES, which touches on the 2330mAh battery and the Android 4.1 Stamina mode.

Sony Xperia Z full specs – the smartphone weighs in at 146 grams, has a 13.1MP camera with auto focus, measures 139x71x7.9mm with a 5-inch display that includes 16M colors and a 1920×1080 pixel resolution. The 2330mAh battery is quoted to achieve up to 11 hours talk time and 550 hours standby time, although it is worth noting these are figures Sony put on paper and not after a real-world review with the Xperia Z.

The handset is powered by a quad core 1.5 GHz Qualcomm APQ8064+MDM9215M chip and runs on Android 4.1 Jelly Bean. If you’re looking for Sony’s full Xperia Z specifications then see the details below. 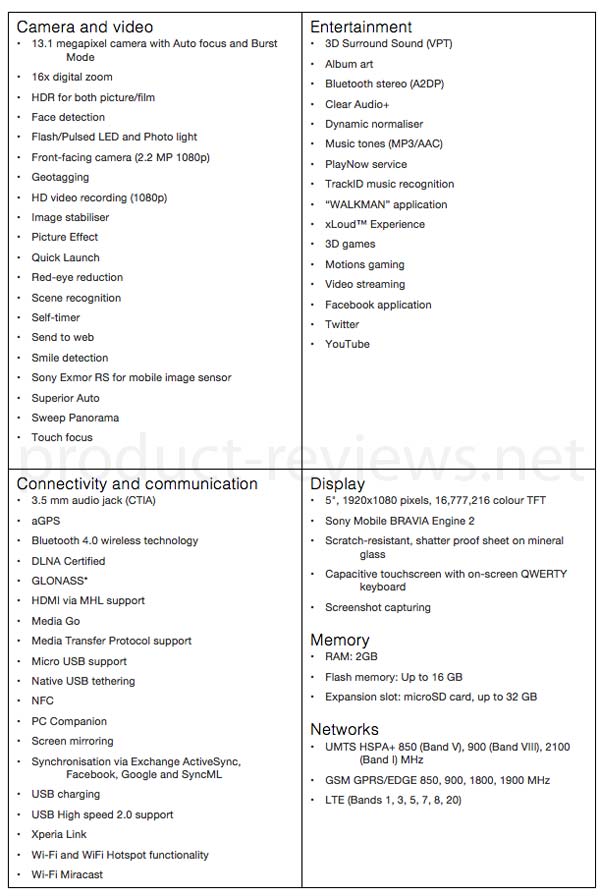 Sony Xperia Z visual review – we have featured a number of video reviews from CES this year, which give you a closer look at how the new Xperia smartphone looks in-hand. The first video below delivers just over 5 minutes of hands-on time with Sony’s next flagship Android device and takes a close look at all the main features, although the background noise is pretty bad considering how busy CES had been at the time of recording.

The second video delivers a better look at the main Sony XPERIA Z features and why they were decided upon thanks to a walkthrough with a Sony official. This demonstration is pretty impressive considering it also shows the Sony XPERIA Z being dropped in a bowl of water, and the handset can apparently handle being submerged in up to one meter of water for around 30 minutes. You can see a screenshot from this video above and it is worth pointing out that this technical demo includes another part in the third video as well. You will also find another hands-on review with the Sony XPERIA Z in the last video, which delivers another perspective.

After taking a look at the full Sony Xperia Z specs and detailed hands-on videos on this page, what are your thoughts on the Sony Xperia Z? You can see the official website for the Xperia Z smartphone here.