The full retail Sony Vegas Pro 10 download were made available a few weeks back, and since its official release we have seen a couple of hands-on reviews, and expansions from 3rd party developers for the new software.

Sony has integrated some of its best technologies into a single product, and the $599.99 Sony Vegas Pro 10 price seems a good deal once you look at the full feature list. You can download a trial via the official site at sonycreativesoftware.com, which also gives an overview of technical specifications, product comparisons, stereoscopic 3D editing, video editing, and a lot more.

PC Mag has taken a look at the main features in their review, which can be found in this article. If you have already bought the software and additional filters, which provide “3D extrusion capabilities” interest you, then you should see an article by Broadcast Engineering that looks at Boris FX and how it adds 3D titling to Sony Vegas Pro 10. 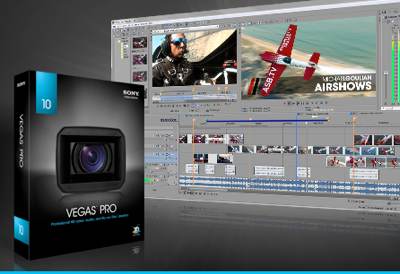 So what has changed from Sony Vegas Pro v9 to the new v10? The best way to understand the main changes is to watch a few video reviews, the one below explains some of the more obvious cosmetic changes, and looks at a few of the new features. YouTube has a list of video reviews, which provide you a visual look at the new Vegas Pro.

Read and watch the above sources, and let us know what you think of Sony Vegas Pro 10. Are the 3D features something that you’ve found useful? Let us know in the comments.