We first told you about the new range of Sony all in one desktop computers back in February, with a release thought to be happing sometime in March. Now today we have news of the Sony VAIO L Series All-in-One iMac rival is coming next month.

A Sony press release has confirmed the new L series will finally be launching next month according to an article by Ammon Carpenter of SlashGear. The company has also revealed that there will be a wall-mount option via a special mount which will be sold separately.

The new PC is being marketed by Sony as an entertainment device which could replace the TV. It has a touch screen with Edge Access built into the screen bezel, and this will work like on-screen shortcut keys. The display itself is 1920 x 1080 full HD, with 3D available. You get with the PC one pair of USB rechargeable 3D glasses.

Performance wise the unit is no slouch with a Quad Core Intel i7 processor, and Nvidia graphics card with 1 GB of VRAM. There will be other options available including the option of Blu-ray player and DVR. There is also a built in HD webcam and USB 3.0, and comes in either black or white. 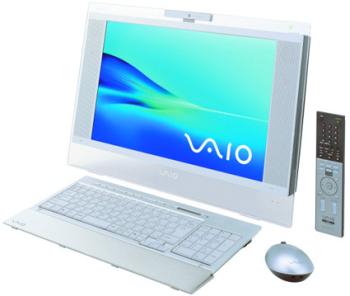 The all in one can also be connected to a games console or other device via an HDMI cable. Pre-sales will start on July 13th on Sony’s website and at some retailers nationwide for around $1,420.