If you haven’t heard the big news coming out of E3 2013, Sony has confirmed in black and white at their press conference that the upcoming PS4 console will not restrict used-games in any way, unlike Microsoft’s Xbox One console. On top of that, Sony has also confirmed that the system does not have any always-on internet restrictions in place like the Xbox One either.

Although devoted Xbox fans may not want to hear it, we have to say that Sony really brought the fight to their rivals in a big way. It almost seemed at one point that Sony were countering Microsoft’s negative aspects of the Xbox One, one by one and you’ll know what we mean if you watched Jack Tretton deliver bombshell after bombshell during Sony’s event live.

For those that missed it, you’ll be pleased to hear that we have the exact moment when Tretton confirms the big news live to the world. Have a listen to the audience reaction as well after Sony announces no restrictions on used-games, we think we started to hear chants of “Sony, Sony” at one point – has that ever happened at an E3 event before? 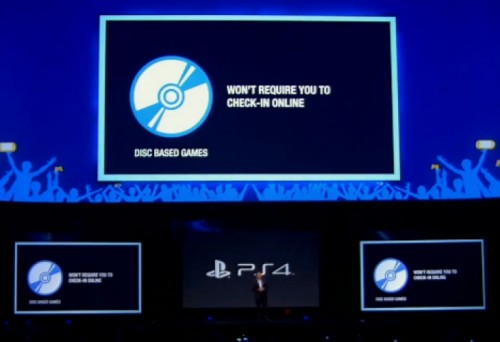 It looks like the recent #PS4NoDRM campaign on Twitter really hit home as well, another testament to the powers that gamers and social media have as a collective effort. In a series of slides, Sony revealed that PS4 gamers will be able to freely trade their PS4 discs with friends, with Sony even making a point to say that you could sell your PS4 games to a friend if you wanted.

The Xbox One won’t play single-player games without an internet connection, but the Sony PS4 will. Jack Tretton said at the event, “When a gamer buys a PS4 disc, they have the rights to that copy of the game.” The Xbox One on the other hand, will only support trade-ins at ‘participating retailers’ and that it will be up to publishers individually to decide whether to introduce used-game fees or allow trade-ins of that game full stop.

Watch the video above and let us know if this is now the deal breaker for you, with the Sony PS4 now emerging as the favorite for your next-gen console purchase.