A few weeks ago, we told you about the possibility of Sony making PS4 Remote Play with the PS Vita, a mandatory feature across all PS4 software, not just a select lineup as we’ve seen with the PS3. It was just mere rumors two weeks ago, but now it looks like Sony are planning to make this a reality, giving the PS Vita much more mass appeal than ever before.

To put it simply: how amazing is it going to be, to be able to pick up any PS4 game from a shop knowing that you can then carry on with gameplay away from the TV on your 5-inch PS Vita. We knew that Sony were keen to make this a feature across some PS4 third-party titles, but now it looks like it has become a mandatory feature for developers.

This means, that developers are going to have to include this functionality on all games they make for the PS4, without fail. The news was initially revealed by a report over at Eurogamer’s Digital Foundry department, but has now been clarified by eager Twitter user, Sony’s Shuhei Yoshida – as you’ll see in his message below. 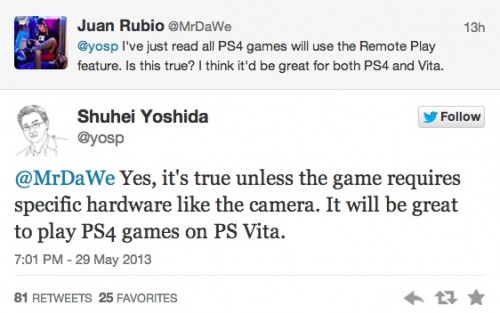 Just imagine the types of games you’ll be able to take away to the PS Vita in the future – GTA V, Final Fantasy PS4, Gran Turismo 6, Watch Dogs and so on – who wouldn’t want a piece of that? It also means that the PS Vita becomes an entirely different beast than what consumers initially had thought.

It would now make sense for Sony to step up plans to offer a PS4 + PS Vita bundle, or indeed issue a small price cut to the PS Vita to really get the sales flowing. Remote Play as a mandatory feature on all PS4 titles changes everything in our books, so we can’t wait to go hands on at the first opportunity.

Does this change everything for you as well? It’s time to start giving some love back to the PS Vita.