Another day, another next-gen console rumor. We’ve heard a lot of spec details about the Xbox 720 over the past couple of weeks, but now things are really starting to get interesting in relation to the upcoming, but still very secretive Sony PS4. A new rumor this week has revealed a definitive specs list update, based on the latest developer kit that is already well in circulation.

With next-gen consoles from Sony and Microsoft seemingly due out before the end of the year, development kits are already in the possession of companies who are hard at work developing games for the new systems, while obviously still trying to keep information behind closed doors.

We saw with the reveal of the ‘Durango’ Xbox 720 kit, that this is a hard task to achieve and now it seems that information is starting to frequently slip out on the Sony PS4 dev kit as well. An in-depth report published by Kotaku claims to be in the knowledge of ‘confirmed’ specs for the latest development kit as of January 2013.

They have compiled a list of hardware specifications for the test build and state that while they may still be subject to change before the final version releases, changes will only be minimal since we’re already progressing to the business stage of the year before the massive E3 2013 festivities begin.

Here is the alleged list of PS4 specifications, the latest and up to date features of the console so far. 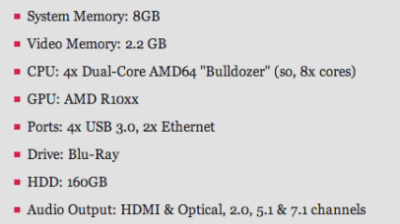 As you can see, we could have an 8 core processor equipped in the system, comprising of 4 dual-core AMD64-based chips with the nickname of ‘Bulldozer’. The graphics are also AMD based which coincides with well known rumors in the past, with the source now identifying the graphics as an AMD R10XX chip.

A 160GB hard drive will certainly be a topic of interest for fans, while we’re also intrigued as to why Sony would need two Ethernet ports, if this really is a genuine list. With so many potential spec lists supposedly leaked over the last few weeks, we just want to see some gameplay now.

Read their report for the full lowdown, decide for yourself whether you believe it, then let us know your conclusion on this supposed dev kit specs update. Would you be satisfied with an AMD 8-core processor?