You have seen Sony’s press conference live and the overwhelming positive feedback over used-game policies and a surprising $399 price point, which is cheaper than Microsoft’s $499 Xbox One. Now, we have an HD gallery of pictures for you to drool over, letting you see the sheer beauty of the new console up close and personal.

Sony had kept fans waiting since February to show the actual console in the flesh, and we’re actually pretty amazed that the company managed to keep the design a secret up until now – considering the infamous leaks in the past prior to E3 events. Now that the wedged box-like design has been unveiled, we have to say that the console is looking very slick indeed.

Like the Xbox One, Sony is using a black theme for their first design. However, the PS4 will differ by combining two boxes together whilst separating each one with a distinctive ridge in between. When the system is powered on, you’ll also notice a rather lovely blue neon light, which we’re assuming will look amazing when playing certain titles in the dark. 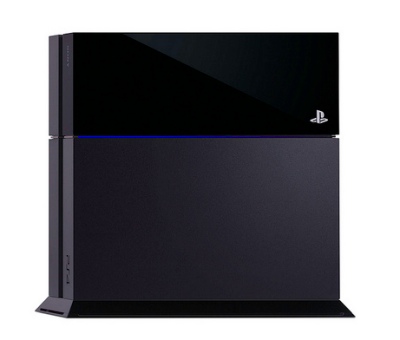 Sony has unveiled a HD gallery on the official blog, showing off the PS4 in a variety of angles for a detailed look at the console in the flesh. We’re also glad to see a photo of the PS4 back as well – just look how many vents there are this time, hopefully no chance of overheating and the YLOD which we saw on original PS3 launch models.

If you zoom into each individual image, you’ll be taken to the official PlayStation Flickr page, where you can download the images in various sizes and set them as wallpapers if you prefer. Have a look at the beautiful gallery for yourself and let us know what you think of the design.

Will you wait for a PS4 slim, or are you definitely buying this version at launch for $399? Are you a fan of the design or not – some feedback we’ve seen suggests that there is a lot of similarity with the PS2.