The moment has finally arrived. After months of speculation and teasing we can finally say that the Sony PS4 console is a reality. As expected, the company announced their next-generation PlayStation system at a big event in New York and proceeded to show off some initial hardware specs as well as some of the third-party and first party games that gamers can look forward to seeing at the end of the year.

If you watched the stream live though as hundreds of thousands did, you would have noticed one big problem – we didn’t actually see what the console looks like, not once. In a somewhat strange turn of events, Sony announced the console, showed off the new DualShock4 controller and camera attachment, but decided to keep their actual PS4 box behind closed doors.

We’re guessing that they either are not ready to show it to the world yet, or they just want to save the console reveal until E3 2013 which takes place in June. What we did get to see though is a confirmed release date period of Holiday 2013, meaning that US gamers will be able to pick up their next-gen PS4 before the end of the year.

Either way, Microsoft hasn’t wasted any time giving their thoughts on the PS4 hardware no-show. Here is a Tweet from Major Nelson showing what he thinks about it. He also revealed a picture showing him and his team watching Sony’s event whilst eating popcorn. 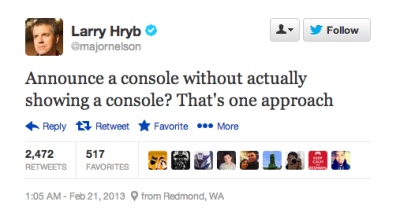 Some other missing details though involve a lack of release information for Europe and other parts of the world and perhaps more importantly – the big price that the new technology will cost. Sony made a big emphasis at the event to say that the architecture of their PS4 is based on a PC, meaning that games should now be easier to develop for and should overcome any problems that developers had when building games on the PS3.

8GB of RAM has been confirmed as system memory, two teraflops of processing power and a ‘high spec PC-based’ GPU system. It looks like the system will ship with a Kinect-like motion camera system, which will interact with the motion sensor on the DualShock4 controller to provide movement tracking directly from the controller. We had already seen the nuts and bolts of the controller leak prior to the event and having seen the pad live on stage, we have to say that it actually looks pretty sexy.

We’ll be providing a full specs chart soon, as well as game trailers and feedback from all of the games announced at the event – Killzone and Watch Dogs are looking superb. For now though, we want to gage your thoughts on the fact that we didn’t see the console at the event. Are you disappointed about this, or still satisfied enough with the rest of the reveals to keep you busy until E3 2013?