Sony today provided “some clarity in a very confusing market on what’s available on each ‘box” by releasing an infographic. The interactive image tries to prove it is the best system to purchase in a selected range that includes the Apple TV, Xbox 360, Nintendo Wii, Roku, and Boxee. 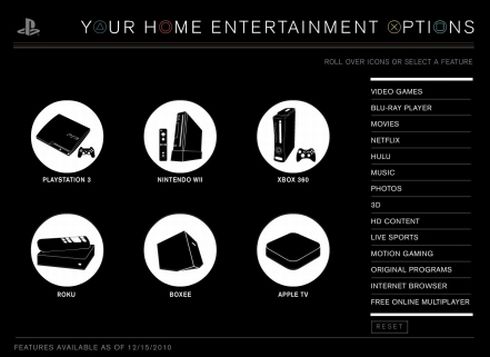 The graphic shows images of all devices named above, along with a list of 14 compiled features that come with each device. When your mouse hovers over one of the available ‘boxes,’ the features it has are highlighted. Alternatively, if you hover over a feature, for instance “Video Games,” only the devices that can play video games would be highlighted.

As you probably guessed, the Sony PlayStation 3 supports all of the features it lists. This includes Hulu, 3D, Blu-Ray, Free Online Multiplayer, and so on and so forth. 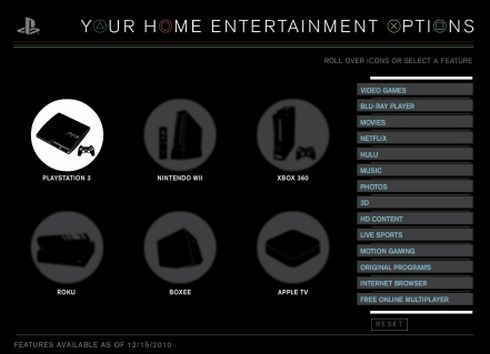 The reason behind this graphic is not entirely clear. One would think that Sony are putting out a relatively large push in marketing the console over the holiday season, and the new recruit — the PlayStation Move. But truth be told, the Move is not selling as well as Kinect, and according to reports, the PS3 is third, behind the Xbox 360 and Nintendo Wii in console sales respectively.

The real message Sony are trying to deliver is diversity. They clearly have a lot of wanted features on their console, and intend to point it out, just in case consumers were unaware of what a PS3 console could actually do.