It’s Christmas season and consoles are going to bought by the bucket load (or so the console industry hope so). In a new patent, Sony hope to increase the lifecycle of the PS3 without the need for a PS4. They intend to do this with an external processor which will make the console even more powerful than it is now.

What this means is that we could be on the verge of a Sony PlayStation 3.5. The benefits that the external processor can give the PS3 is obviously, more power but it would mean that we won’t be seeing the PS4 anytime soon.

The extension to the console could confuse PS3 customers, and while Microsoft and Nintendo could release updated versions of their consoles, PlayStation fans could be disappointed that they are stuck with an older generation console, with an addon. Therefore the name PS3.5 comes to mind.

The official patent from Sony Computer Entertainment Inc. Tokyo, Japan explains the reasons for the external processor and why it would benefit customers.

In recent years, there has been an insatiable desire for faster computer processing data throughputs because cutting-edge computer applications involve real-time, multimedia functionality. Graphics applications are among those that place the highest demands on a processing system because they require such vast numbers of data accesses, data computations, and data manipulations in relatively short periods of time to achieve desirable visual results. These applications require extremely fast processing speeds, such as many thousands of megabits of data per second. While some processing systems employ a single processor to achieve fast processing speeds, others are implemented utilizing multi-processor architectures. In multi-processor systems, a plurality of sub-processors can operate in parallel (or at least in concert) to achieve desired processing results.

The patent is shown in a picture below. To conclude the above statement. Sony also added that: –

Accordingly, there are needs in the art for new methods and apparatus for interconnecting one or more multiprocessor systems with one or more external devices to achieve higher processing capabilities. 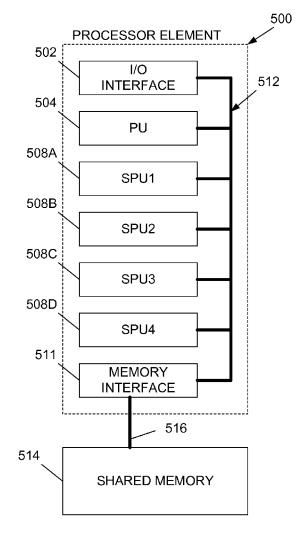 The patent was filed way back in August, but has only been recently published in the public domain. You can read more on the patent and what it means via PlayStation Lifestyle.

With talk of a PS3.5 and an Xbox 560, basically two ‘pre-versions’ of next generation consoles before we see the PS4 and Xbox 720 (assuming that’s what they are going to be called), would you shell out for an external processor to ramp up the power of your console? Let us know your thoughts below.