While Sony announced much welcome prices for their upcoming PS Vita handheld in the US, Europe and Japan, one thing they obviously didn’t mention is how much Vita games are going to cost. The good news, is that some retailers have already revealed potential pricing for the software.

The great news to tell you, is that it looks like Vita games are definitely going to be on the ‘affordable’ spectrum, as opposed to ripping a hole in your pocket each time you buy games for the system.

A screenshot apparently taken from GameStop’s inventory listings has been provided by Dual Pixels, and it reveals that Vita games may be priced in at $39.99 in the US. Just to convert that into pounds for you, that works out around £25 for a title, but as we all know – you never get a clear cut exchange rate comparison on Sony hardware and software, so we expect PS Vita titles in the UK to be bumped up to around £30. 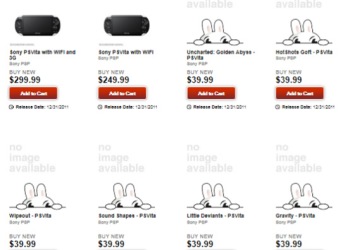 That’s pretty good pricing you have to agree. Don’t forget that some of these titles are going to support touch controls, augmented reality, and even cross-platform play with the PS3 as stated in our recent feature article here.

We certainly wouldn’t mind paying $39.99 or £30 if the pricing ends up around those marks. What are your thoughts on paying $40 for a PS Vita title – do you think it’s a fair price or not?