We have some exciting news for those of you who have been keeping a close eye on developments for the Sony PlayStation Phone, as we have full preview of the device for you to read, as well as a great hands-on video.

Engadget has somehow managed to get their hands on the PlayStation Phone, and have done the world a favor by posting a full report on the device complete with pictures and videos, seemingly a good while before Sony announce it officially at the Mobile World Congress in Barcelona.

We’re going to focus on one particular aspect of their preview – a video which finally shows some gameplay action. Engadget didn’t go into specifics, but they were freely able to ‘download’ some emulators for the device – one was a Gameboy Advance, and the other a PlayStation one. We’re not sure that it’s entirely legal, but we bet you’re dying to see the results anyway.

The games shown were Ridge Racer and Tony Hawks Pro Skater 4. We would have loved to see these played using the full length of the 4-inch multitouch 854 x 480 LCD, but it was still very satisfying to see these running without any apparent framerate problems or slowdowns. Super Mario Advance 4 was also tested and worked like a dream. 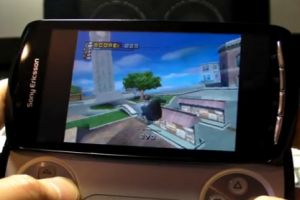 It’s clear that you can use the PlayStation Phone to download emulators and roms which will be enough for most, but we still don’t know what Sony’s actual plans are from a gaming point of view. Will they offer a direct service to download PS1 games from the PSN store, or do they have something completely different in the works? 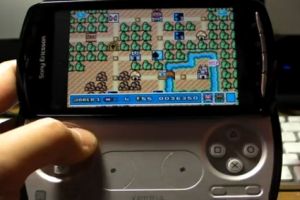 Either way, we can’t wait to see what the final product looks like. Check out Engadget’s video below and read their full preview in the link above. Let us know your thoughts on the device after seeing this video – impressed?