Some breaking news to bring you now, and it is a bombshell. Despite the fact that the PSP2 is on the horizon, the first pictures of a separate Sony Ericsson PlayStation phone have appeared in prototype form.

Engadget are the ones with the scoop and although the pictures show an early prototype model, they are looking very legitimate and you can clearly see the four PlayStation buttons on the slide-out keypad.

First of all, just take a moment to study the actual design of the PS Phone. It confirms early rumors that it would come with a unique touchpad located between the D-Pad and the buttons – we’re guessing these will replace the analogue sticks that you’d usually find on the DualShock controller. There are also L and R shoulder buttons on the top of the handset.

The screen itself is thought to be 3.7-4.1 inches in size and Engadget confirm that it will be a Sony Ericsson branded phone running Android, possibly even version 3.0 Gingerbread.

Other specs include a 1GHz Qualcomm MSM8655 processor, 512MB of RAM and 1GB of ROM – no word on the internal memory yet, but it will have support for MicroSD card. There is also a camera on board, but the exact sensor involved has not been disclosed yet.

As for a release, Engadget say that it still could release before the end of this year, but a release in 2011 is more likely, considering that this is the first time that the device has been shown properly.

Quite a lot to take in, what are your early thoughts on the design. We’re excited to say the least, are you? 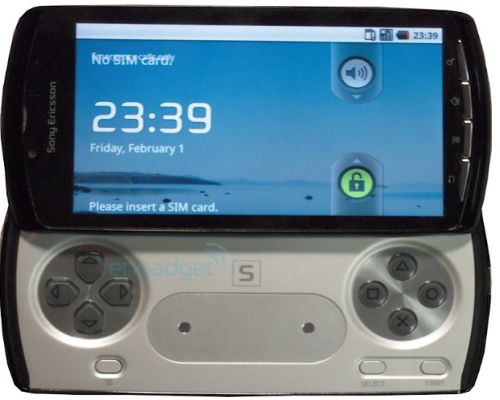