Yesterday we posted an article which gave you a good-look at the upcoming Sony Ericsson Xperia Arc, we suggested that it would be running Android 2.3 Gingerbread, however it looks as if Gingerbread may in fact be Android version 2.4. 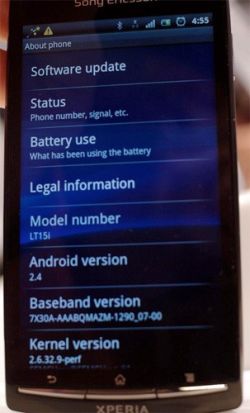 I’m sure that by the end of CES 2011 things will be a lot clearer, hopefully we will be able to confirm which Android release the Arc will run as standard (Gingerbread / Honeycomb)and which version numbers will be given to the Android releases.

To be honest with you I would much prefer Android 2.4 to be given to the Gingerbread release and Honeycomb to be given the Android 3.0 version number, let’s face it we have heard that Honeycomb will not require physical buttons (for things like Home, Search, Back and Menu), therefore this significant change requires a significant change in version number, what do you think?