For those of you who have been searching for solid information on the upcoming PSP2, this is probably it. Engadget has scooped some exclusive details on Sony’s new gadget, and it looks to be a merge with Sony Ericsson on a PSP Go / Smartphone device.

As taken from their article, Engadget reveals that Sony Ericsson is designing a brand new mobile gaming platform, and their first hardware device will be a cross between the Samsung Captivate and the current Sony PSP Go handheld system.

They have included a mock-up image with their article so you can see what it looks like, but they have also provided some hardware specs that they have obtained. The device will feature game controls in place of a QWERTY keyboard, and these will consist of a D-Pad and Playstation buttons.

As for the display screen, it is thought to be a 3.7 – 4.1 inch display with a WVGA or better resolution. Since it is also a smartphone, it will come equipped with a 5 megapixel camera, 1Ghz Snapdragon processor and Android 3.0 Gingerbread operating system.

Engadget finish off by saying that the device will also most likely come with both the Xperia and PlayStation brand logos. Pretty exciting details there you have to say. Read through them and let us know what your initial impressions are.

Do you like the sound of the PSP2 or not? Expect full details at Gamescom. 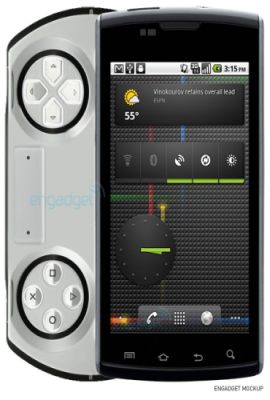