Who remembers when Sony Ericsson were near the top of the cellphone market, I certainly do as they brought out phones with high specs and cameras with more mega pixels than anyone else. Since the iPhone has been on the scene they seem to have quietened down and are a little less common.

Could they be staging a comeback? Recent reports would suggest they are! Sony Ericsson has filed for a patent, it is a little unclear as to what the patent is for but we have a picture to show you which is below. It is good to see them getting hold of the Pico Projectors too, you can read more about them here and here. 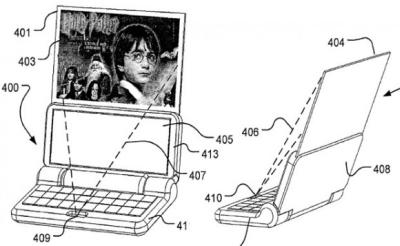 The way I see it is they are trying to add a projector screen onto a smartphone that you can pull out at will, once out obviously from the picture you can see that the Pico Mini Projector will place the image on the screen.

I have been wondering for the last couple of years how long it would be until we had a device like this, you technologically advanced cellphone that is a little different. This offers some thing new that other companies may not even buy into, kind of a niche.

One of the guys at slashgear.com, Chris Davies has suggested a couple of ways of attaching the screen be it a hard one or like a miniature roller but I think they should do this a slightly different way. Looking at the patent picture it shows a clam shell shape obviously this is subject to change but if it was a similar design, perhaps it could have something that physically slides out of the device. Almost like when you take the memory card out of a camera here you press it in and then it comes out slightly so that you can grasp it then pull it out to the desired size.

This isn’t the first idea for a device like this, a similar idea but different design is present in the other Pico Projector phones which you can find plenty of pictures of on Google by clicking here but also below is a sample to get you thinking. 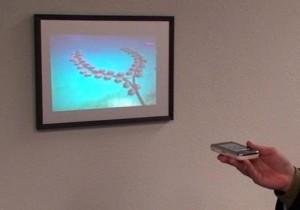 Have you got any ideas for a mechanism that might work? Let us know in the comments below.