It has been announced that for the first time this year the Wimbledon Tennis finals will be filmed in 3D, and showed live in HD in 3D cinemas around the world. In partnership with host broadcaster the BBC, it will also be offered to interested global broadcasters.

The All England Lawn Tennis Club and Sony announced the news so fans can experience the finals like never before, and will still retain all the excitement from the famous Centre Court. Sony will produce the men’s semi-finals and finals, as well as the women’s finals in HD 3D. Sony will also work with SuperVision Media as their theatrical distribution partners.

The service will be offered to other interested broadcasters around the world so a wider audience can enjoy this year’s finals in stunning 3D. Every smash forehand and volley will be seen like never before. Chief Executive of The All England Lawn Tennis Club Ian Richie said they were “delighted” about the partnership with Sony, and that “younger supporters” will enjoy the experience. 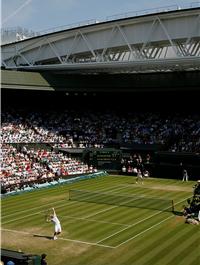 Sony’s , President of Sony Europe Fujio Nishida said “We are delighted to be working with the All England Lawn Tennis Club to bring such a high profile sporting event to consumers around the world in 3D”. They feel by offering the service worldwide in cinemas, will bring the iconic tournament to fans so they feel like actually being there.