The guys over at Engadget recently got their hands on the Sony Alpha NEX-C3, in their review they scored the digital camera 9/10 which instantly caught our attention, therefore we thought we would look into exactly why they rate this camera so highly, also we will tell you why it didn’t get a perfect 10/10 score.

Let’s start with what is something which always makes or breaks a digital camera, its price. As you would expect from a camera of this nature there are lots of lenses and accessories available, however prices do start at just $599. For this you get the camera with the 16mm f/2.8 kit lens, however enthusiasts may opt for the 18-55mm f/3.5-5.6 kit lens which sets you back $649 (with the body). As you would expect the NEX-C3 only comes with a single battery, although a spare can be bought for an additional $80, that said the standard 1080mAh NP-FW50 battery impressed Engadget and they say that they’d “feel confident using the C3 through several consecutive days of heavy shooting”.

The 16 megapixel sensor is something else which is in this camera’s favor, you can see a gallery of sample images here, Engadget are also impressed by its portable size and say that they are considering kitting out all of the Engadget’s team with this ILC, we thought some of the images didn’t boast the sharpness which some DSLRs capture, but we were impressed by the fact that in a wide-range of environments the stills looked great, especially the colors.

We recommend checking out Engadget’s review for fully detailed information regarding the Sony NEX-C3, below we will explain why it didn’t get perfect marks. 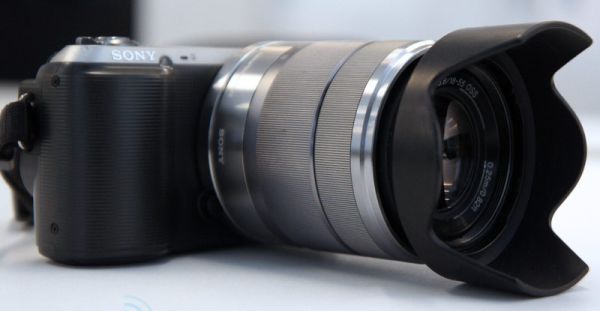 If you are a real photography enthusiast you may be a little put off by what some regard as a limited lens selection, however as Engadget point out the selection is growing. Another slight imperfection was the fact that the camera does not allow for 1080p video capture, lots of people will buy the camera for its still image capabilities alone, however if 1080p video capture is required the Sony NEX-C3 is not for you as it is only capable of 720p video shooting.

Finally we must mention that the NEX-C3 features a propriety connector rather than the widely used hot shoe, this will put off some potential buyers as it means that you have to buy dedicated external flashes, however it is worth noting that the connector is the same as what Sony used for the NEX-3 and NEX-5.

All in all it is clear the pros seriously outweigh the cons, we think 1080p video capture would have made this almost a perfect camera, more lenses will come in the future and we don’t see the propriety connector as a major issue, do you?