More often than not we know about the release of a camera long before its official announcement, but this was not the case with the Sony A7S. We already discussed how Sony kept us in the quiet about its new camera, and how significant its release is. However, to get a better perspective of this new shooter, we need to see how it compares to its predecessors, the A7R and A7.

There might not be a Sony A7S vs. A7R and A7 comparison video just yet of these three mirrorless cameras, but we doubt it will take too long before we start to see these review videos on YouTube. So, for now we are going to have to make do with a good old-fashioned showdown, and so we look to an interesting article from Imaging Resource.

Following the reveal of the Sony A7S, the dedicated camera website had a burning question that needed to be answered, and that was how this new model differed to its two other siblings? 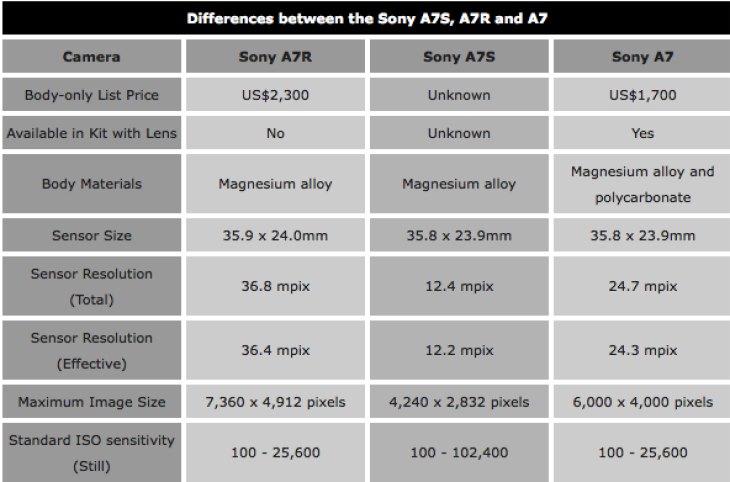 Sony A7S vs. A7R and A7 differences — They already knew a lot about the all-new sensor that appears in the A7S, and how it makes for a much better low-light and high-light sensitivity shooting, as well as videos, but what of those other unanswered questions?

We could go on for ages trying to explain these differences in more detail, and elaborate on the image that you see above. However, it would be far better for you to head over to imaging-resource.com because they have dissected all of the new Sony A7S features, and then compared them to the A7R and A7.

If we can take anything from what we have learned about the A7S, it would be how nice of a change it is for a manufacturer to work on increasing image quality rather than pixelcount.