If you thought the Samsung Galaxy Note 2 was a large device, it looks like Sony may be planning to be the new leader in the largest phablet stakes. Nothing is official yet, but images have popped up online appearing to suggest that Sony has a 6.44-inch smartphone in the works – a device which would easily eclipse the Galaxy Note 2, which was measured in at 5.5-inches.

We thought the phablet range couldn’t get any bigger at 5.5-inches and even some consumers thought the Galaxy Note 2 was a little on the big side when it released. On the other hand, other consumers embrace size and if that is Sony’s reasoning behind this potential product, then they could well have the biggest phablet out in 2013 if this image turns out to be legitimate.

The image above has been posted to a Chinese forum, appearing to show a factory environment and a device which the uploader claims is a component for a 6.44-inch 1080p based Sony smartphone / tablet crossover. The company has just finished their CES 2013 proceedings of course, in which they announced the 5-inch Xperia Z smartphone and more recently, the 10.1-inch Xperia Tablet Z.

It’s clear that Sony are now looking to build products at the more premium end of the market and with the phenomenal success of Samsung’s Note range, it wouldn’t be surprising to see Sony attempt to emulate that with a large phablet device of their own. With that all said though, it isn’t hard by today’s standards to produce a fake image so we should still treat this as a very thin rumor for now. 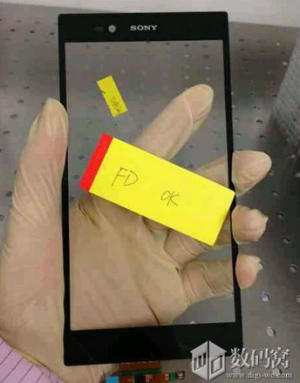 We would love it if Sony are really planning to take Samsung on though in the large phablet stakes. It is very early days yet, but would you have any usage for a 6.44-inch beast from Sony? Hopefully we’ll hear more details on this soon.