I have reviewed many earphones, headphones and wireless speakers over the years, but for some reason have never managed to review a Sonos device. I thought I would rectify this my reaching out to them, and was given the PLAY:3 to review. Now I know what you might be thinking, why review something that is almost 4 years old, and in most cases you would be right to ask such a question, but not this time.

In most cases a wireless speaker will always sound good, but only until a new model comes along to make it obsolete, but this is not the case with the Sonos Play:3 because it is still a firm favorite to this date because of its understated design, with rich, clear sound — or this is what I have been told by friends and family members that own one. It is for this reason why I was very excited to be given a Sonos Play:3 speaker to test out and to offer a hands-on review. 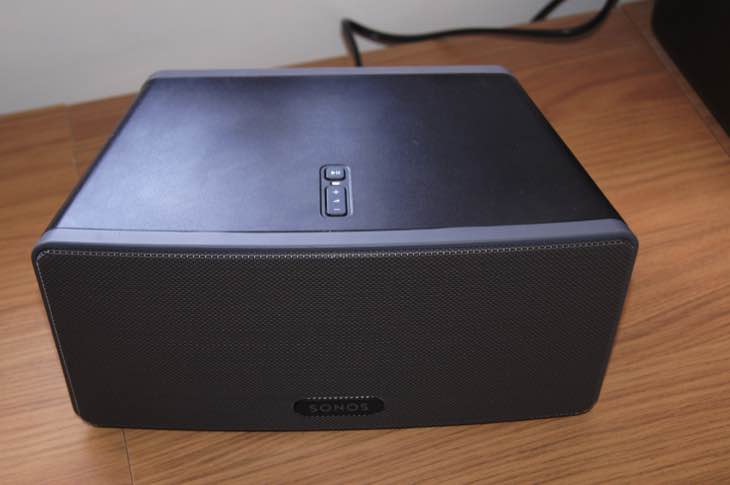 However, this never put me off one little bit because the Play:3 has a decent weight to it and not as gimmicky as some entry-level wireless speakers on the market. It might be low-cost, but no corners have been cut in its design, and while it does not look as interesting as Polk’s Camden Square, it does have a lot more going for it, such as the ability to link to other Sonos speakers. 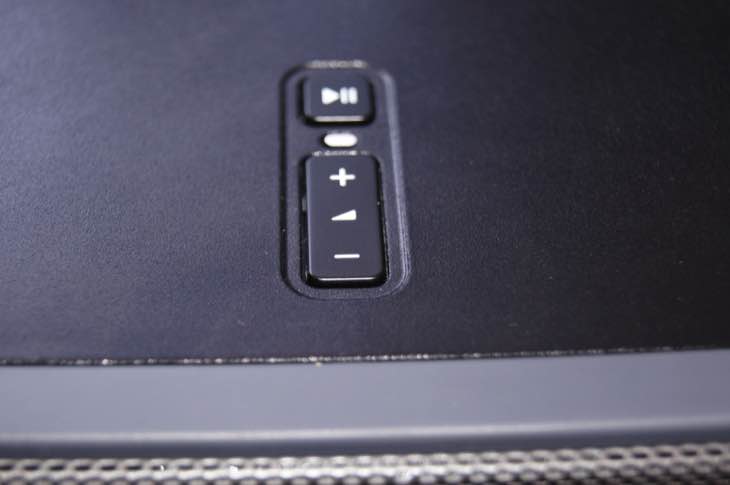 Sticking with the design for a bit, and some of you may be put off with the black or white plastic (black in this case) surrounding the speaker, although the curved speaker grille is a welcome addition, along with a rubber band that runs around its edge to help protect it if mistreated. It’s also rubberized on the rear, which helps to protect the ports. Speaking of which there is just the power input and Ethernet jack, as well as a threaded part to mount the Sonos Play:3 to a speaker stand. The only other discerning feature is its volume rocker with mute, pause and play. These buttons are also used in sequence to set the device up. 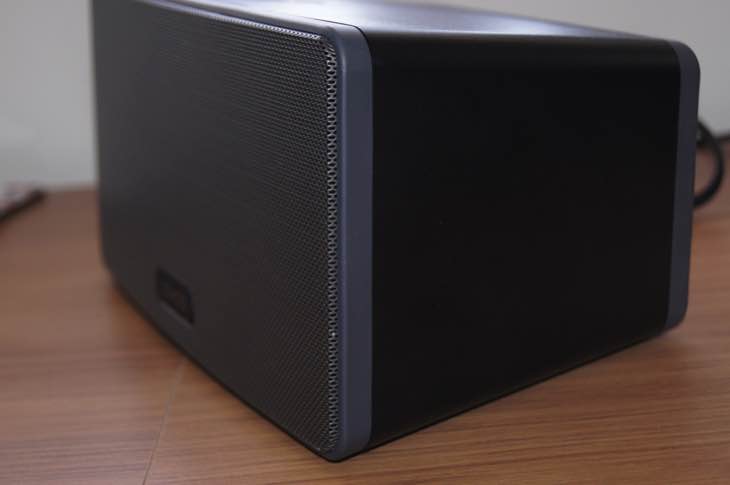 It is not worth going through the set-up process because it was rather easy after installing the Sonos app onto my iPhone 6. Having read reviews where some people had an issue at this stage, mine was uneventful. I did not need to set-up a Bridge because I was only using the one speaker, although it would be great to try out several speakers at once at a later date. 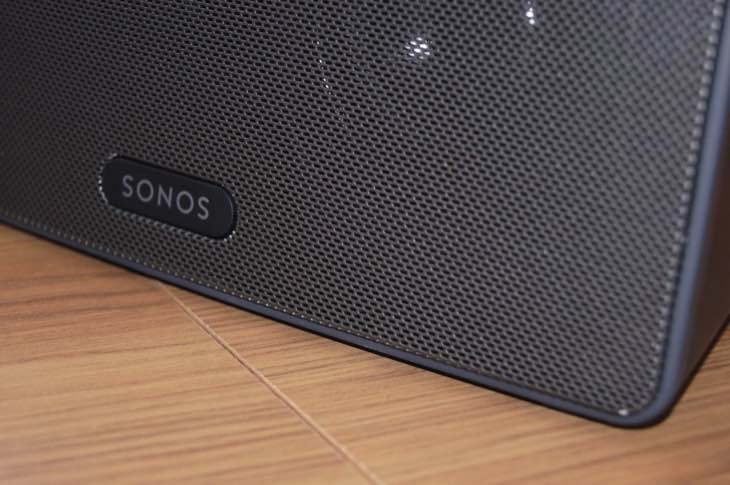 The set-up process was really that simple, and there is none of that pairing the device to Bluetooth like I have to each time I use the Polk Camden Square, as the Sonos speaker is always linked up to your home network, even wired or wireless — in my case the latter.

You could choose to have a Sonos Remote, although the app works just as well, and so not worth the expense, unless you plan to use it a lot and do not wish to keep using your mobile device to control the functions. If you do have multiple speakers, then you can set up zones in your home, which Sonos better explains on its website, but I will not get into that, as it does not apply to a review on just the one device. 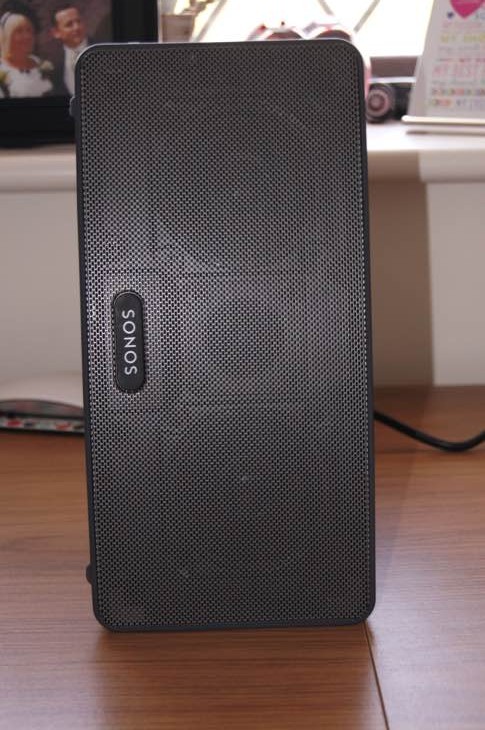 The first kind of music I put through the speaker did not have too much bass in it, as I wanted to test the clarity first, and was pleasantly surprised seeing as though the Play:3 lacks two drivers and some clarity compared to its larger sibling, the Play:5. Even when turning the volume up the sound is still impressive considering the price, but once you do add music with bass into the mix you do notice the lack of those drivers. Having said that, if you do not turn the volume up too much, then you will be fine, this is because when the volume is high the bass starts to become unclear, and spoils the audio enjoyment. 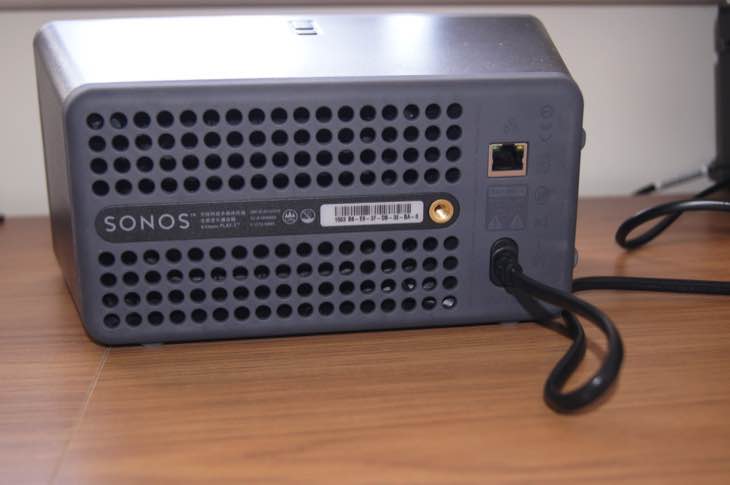 What did surprise me was how much better the sound quality was than the Bose Sounddock, especially as there is no need to dock your device. Another positive is how you are not limited in terms of distance like you are with the Polk mentioned early, which uses Bluetooth. Having said that, the Play:3 is not as portable because it needs to be in range of the WiFi, and plugged in to the mains, so not ideal if you want to take it into the garden during a BBQ. It’s for this very reason why some people choose to have two wireless speaker options.

My overall experience was a rather positive one, and while there are times when you can notice the Play:3 lacks in terms of bass and clarity when compared to the Play:5, I cannot help wonder how great the outcome would be if a few more of these were linked up to one another?

The sad news is, I now have to send the Sonos Play:3 back, which is a real shame because while it may lack the portability of the Polk Camdem Square, it more than makes up for that shortcoming with its better audio quality. For more details you can visit Sonos, where you can currently purchase this 3 driver HiFi speaker system for £259.