Now that the “Sonic Colors” game — available for both the Nintendo Wii and DS consoles — has seen its worldwide release, I thought I would take a look at a few of the reviews that have now surfaced online. Judging by the reviews, it looks like Sega has done well with the latest title.

The first review I looked at was from Michael McWhertor over at kotaku.com, which describes the “Sonic Colors” title as possibly the best Sonic the Hedgehog game within the last decade. Despite claiming that it fails to deliver interesting boss fights, this review still says it’s one of the best.

Another review I read is from Jason Cipriano over at mtv.com, which claims the game is suffering from “multiple personality disorder.” In so many words, there are so many different things going on in the game that even the biggest of “Sonic” fans won’t know what to expect next. 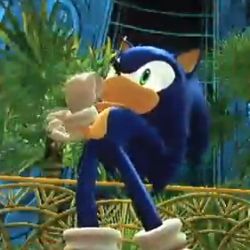 In the meantime, Arthur Gies from ign.com has given “Sonic Colors” a rating of 8.5 out of 10. According to this review, the story of this game works fairly well, the graphics are the best Wii graphics of this year, there’s some fantastic level design and it features great animation.

Lastly I took at a look at a review by John Mix Meyer over at wired.com. Again, this review describes “Sonic Colors” as the best Sonic the Hedgehog game in years. However, it does go on to say that the title stumbles a bit towards the end, with the checkpoints in the last levels being frustratingly infrequent.

You can read the full reviews by visiting the links provided above. Have you played “Sonic Colors” yet? If so, what do you think of the game?