When Grand Theft Auto V finally gets a release date there will be a massive number of gamers saying goodbye to their social life, and looking at some recent news it looks like that time is almost here. Throughout the year we have heard little from Rockstar and most articles have been trying to piece together the facts, but in the last week alone we had our strongest signals that Rockstar are about to give us some solid GTA V news at last.

Last week we saw a video tease for Gamescom that included a couple of seconds from the first GTA V trailer, which you can see here if you missed it, and as you can see from gamer comments most people loved this news thanks to it being something solid at last. While E3 didn’t bring anything related to Grand Theft Auto, it seems that Gamescom will be very different and should deliver trailer 2 if the above tease is anything to go by.

If the above news is not enough to show gamers they’ll be finally getting some solid details at Gamescom, then hearing official comments from someone at Rockstar support could offer another hint. Most of our readers that check for “GTA 5 news” everyday would already know about this, and if you haven’t then see the screenshot below. The person that contacted Rockstar about the GTA V release obviously didn’t speak English very well, but thanks to them we got some signals towards the plans being made and what state GTA V is at right now. 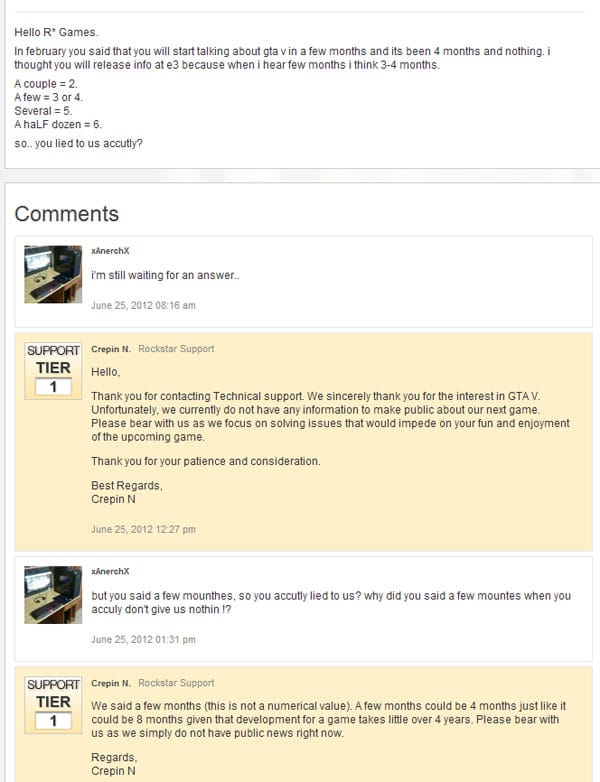 The most important clue we saw had been the comment on “solving issues“, which means if they are focused on this for the “upcoming game” then Rockstar should be in a testing stage. If they are focused on glitches that could “impede on your fun” then this news would mean a lot more is very likely to come at Gamescom. The timing is right if they are in testing and this clue only supports the tease in the Gamescom teaser video.

Hearing the development for Grand Theft Auto V takes “little over 4 years” is another signal, which most of us already understand as fans of GTA, but obviously the person that contacted support doesn’t understand that development would have started around 2008. This means Rockstar support are telling us GTA V should release a little longer than 4 years after development starts, so if this prediction is correct then we are looking at 2012, or early 2013.

With so much focus on Max Payne right now you should expect some solid news at Gamescom and an early release in 2013, and most gamers have already commented along the lines of “Let them take as long as it takes“, so most fans will be happy to wait until early next year. It’s also obvious that Rockstar don’t need to worry about creating hype, although it happens naturally by keeping silent anyway, and GTA 5 is almost certain to be one of the biggest games for years.

These two clues from the last week are as near to news you’ll get, and if you believe them then we pretty much know what Rockstar are planning to do in the coming months. Share your thoughts in the comments.