Whenever we think of fast road cars, the first vehicle that comes into out mind has to be the Bugatti Veyron. So would you be very surprised by the fact that a car going 55mph or 88kph would have set a world record? Well that is just what the Sunwift IVy solar car has done by setting the solar powered record.

The previous record was set back in 1987, which achieved a speed of 49 mph or 79kph. You have to wonder how come it has taken so long to try and beat this record and in 33 years have only beat it by 6mph? Technology has come a long way in that time, so how come the result seems to look bad? 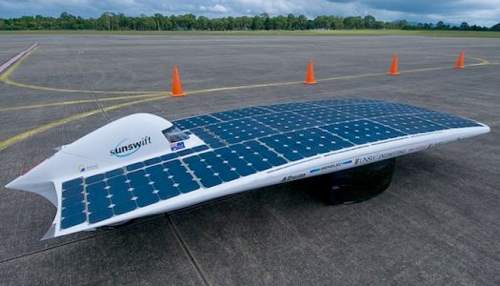 We are not experts here, but surly solar technology, aerodynamics and friction from the wheel to the road has changed more than this result shows? However, in a recent Cleantechnica article they do state that all the batteries were removed and was just sustained by silicon solar cells themselves — the 55mph speed seems to be a great achievement after all.

Sunswift has a number of FAQs, and one of the questions was why it had taken the record so long to be broke? The answer was interesting, as they said that no one else had tried — well that answers y rant from above as well.

We now seem to be going through a stage where more tests are being done on solar powered vehicles and craft, you only have to look at the recent Solar Plane Impulse test to understand just what we mean.