Information on the upcoming SOCOM 4: U.S. Navy SEALs game — which will be released exclusively for the PlayStation 3 — appears to be coming in thick and fast at the moment. Just yesterday we brought you news on the official US release date and the recently revealed multiplayer trailer.

The single player campaign mode features 14 robust missions for gamers to battle their way through, as well as an active armory that allows them to scavenge and modify their enemies’ weapons. The game also features international forces, meaning your character’s nationality can change depending on your region. 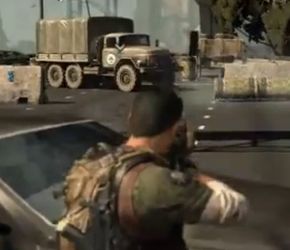 As players progress through their online career, they are rewarded with items such as un-lockable weapons, new medals and bonus characters. Steven Artlip from the platformnation.com website spent a little hands-on time with SOCOM 4’s multiplayer mode recently, and provided a few details.

According to Steven, the upcoming game has more of an arcade type of feel to it compared to previous titles in the SOCOM series. One of his pet peeves was the way he was able to throw a grenade about thirty or forty feet with ease, which as he notes is hard to do in reality.

You can read Steven’s full preview via the platformnation.com link above.