Samsung has shown to the world that they are always looking for the next opportunity to show other consumer electronics makers that they can come up with a new concept, something that has not been done before. You might have already guessed that we are talking about the Samsung Smart TV, and how they have not only brought apps into the equation, but also made it a social media marketing success.

There are those of us who like nothing more than to get home from work, watch some TV and talk to friends on Facebook about what you have been up to or what you are watching. How many times have you been watching a sporting event, TV show or movie, only for you to get your laptop, tablet or smartphone out and connect to Facebook or Twitter to share what you have just been watching? 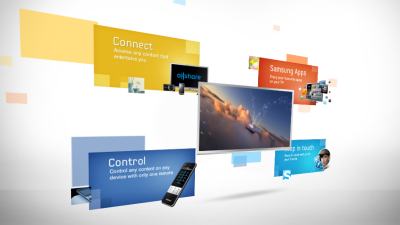 With Samsung Smart TV we can now see how this will help the growth of social media at a much faster rate than ever before. This is not only good for the user, but those brands who also have a social media presence. Now you could be watching a commercial, see something that you like and head directly to that brand’s Facebook page, it is really a win win situation. Samsung Smart TV also has its very own Facebook page, where you can get an insight into what consumers really think of this new service.

Now we know that the likes of Sony has its own version of an interactive TV, but they do not seem to offer as much as Samsung does. The future is now here, so why not sit down, relax and embrace it.

How much of an influence will Samsung’s Smart TV have on social media? Samsung TV’s USA Facebook page can be found here.