Casual gamers and hardcore gamers of the past prepare to be impressed as news today has revealed that SNK are in the process of developing a new handheld portable gaming console called the Neo-Geo, which will be pre-loaded with 20 nostalgia inducing retro games that are sure to bring back memories.

SNK Playmore is the Japan based video game company that is most famous for bringing us the Neo-Geo collection of games throughout the 90s, even producing consoles including the Neo-Geo Pocket Color in 1999. That was the last product from the Neo Geo collection and while nothing official has been announced about their latest device, they will be looking to bounce back with the launch of this latest portable.

From the images we can see that it is an attractive looking console with its sophisticated black finish and features a large 4.3” LCD screen. It is also reported by The Verge to be packing an AV Out port, SD card slot and 2GB memory built in. the games all come from the Neo-Geo library and will be 20 of the best as many of you would agree. They include Baseball Stars Professional, Magical Lord, Metal Slug, League Bowling, Super Sidekicks, The Art of Fighting, Fatal Fury, Fatal Fury Special, The King of Fighters ’94, Samurai Shodown, Cyber-Lip, Frenzy, King of Monsters, Last Resort, Mutation Nation, Nam-1975, Sengoku, Top Player’s Golf, Ultimate 11 and World Heroes.

Of course this device will face tough competition in a competitive casual games market, especially as it is limited to pre-loaded games. Its design is also very similar to existing devices on the market offering arguably better features. Until a price for the console is revealed we will have to guess how well it will do on the market. What do you think of the console? 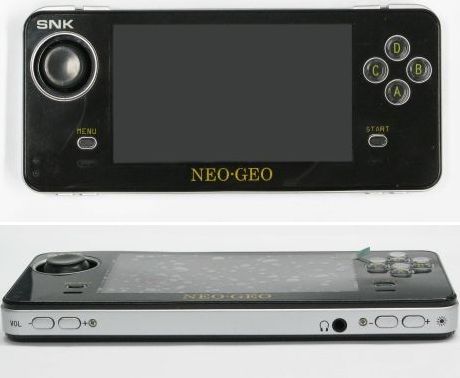