Many users have opened their Snapchat app to find it down with a failed to send error that is causing serious sending problems late on September 17 evening. It’s not clear why snaps won’t send, or why the messages and chat issues have taken place for so long.

Judging by the early feedback that we have seen on social media, this looks like it could be an issue affecting every single Snapchat user at the moment.

Take a look at some of the responses for yourself below to see evidence of this, so we’re assuming that the Snapchat team are already working on seeing why Snapchat is not working today as it should. 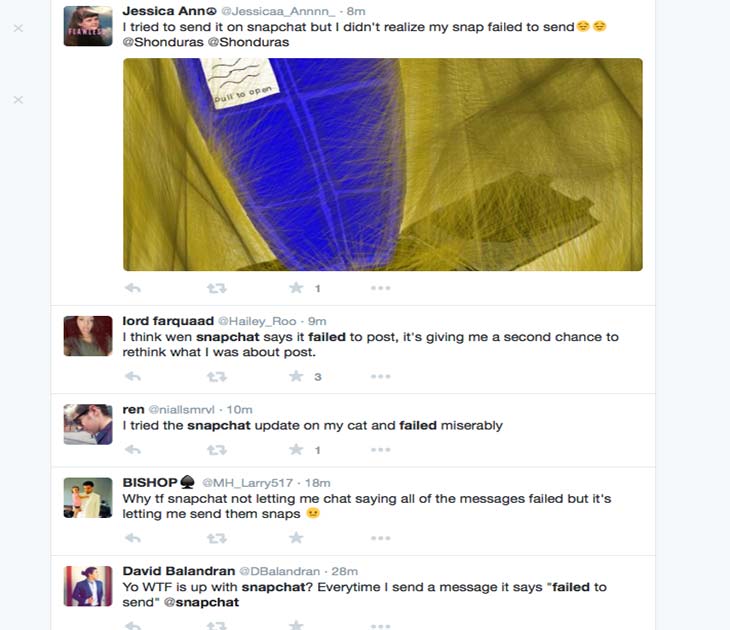 These are some of the common symptoms that we can see happening right now to many users within the hour.

Are you getting the constant message of ‘Can’t send message on Snapchat’ on your device right now in your area? Let us know your status at the moment and whether Snapchat texts keep failing or not to determine how serious this is.

We’ll let you know once we have an official update. The problems continue to hit thousands and there’s still no official response in regard to the Snapchat failed to send problem.

Update 2: It looks like the issue has been resolved after lasting a couple of hours. The official Twitter explained “some Snapchatters are experiencing issues” and that a fix was being worked on. If you still have issues with sending snaps, then leave a comment.