We wanted to give PS4 owners a quick heads-up as we know many of you are asking what time the Smite 3.5 update is out on PS4 today, Wednesday April 12.

This date was initially the plan that HiRez Studios had to deploy the update, with Xbox One getting the patch on Monday of course adding new God Skadi amongst other things.

We’re here to tell you though that the Smite PS4 update won’t be today unfortunately. This has been confirmed by the developers as you can see from the Tweet sent out hours ago by Andy Anderson. 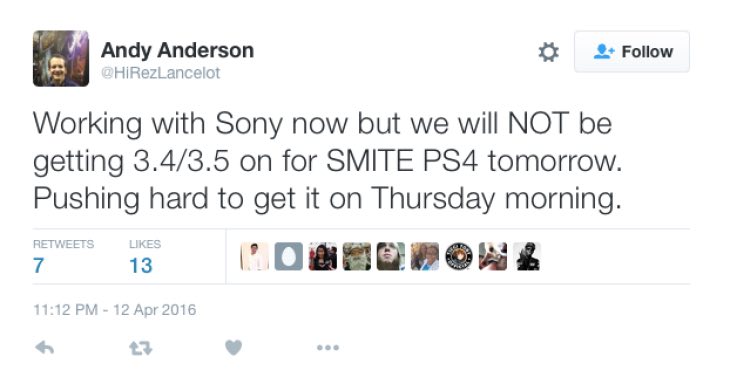 For reasons not mentioned, the target release time for the Smite 3.5 update on PS4 is now Thursday morning, April 13 US time. That means for those in the UK who are waiting for the update, you may have to sit back and wait until the evening.

We’ll try to keep you updated on the rollout as we get more info, but now at least you know not to expect it on Wednesday. Make sure you tell your friends who are also playing Smite on PS4 who wouldn’t be aware of it.

Are you disappointed with the delay given Xbox One owners already have the same update?

Remember you can check out the full Smite 3.5 PS4 patch notes here if you missed them earlier this week.

Update: We now have confirmation from HiRez Studios that the Smite 3.5 update for PS4 will not be available until Monday April 18 – this date is confirmed though. Give us your thoughts below.