While we have yet to see a 2015 Ford Mustang go up against any of its rivals on a drag strip, we have found something that we think will make you smile. We have found a video on YouTube of a Smart ForTwo going up against a Shelby Mustang. Ok, so we know that you are not naive and realize that nothing is what it seems, and you would be correct.

Smart ForTwo vs. Shelby Mustang — Let’s set this drag race up for you before watching the video below. The small little Smart Car has done away with its standard engine and in its place is a 1.5-liter Toyota Paseo Sprintex engine, complete with a supercharger to give it more power.

With that kind of power-to-weight ratio you know you are in for a real treat, one that will see the Mustang in for a bit of trouble. 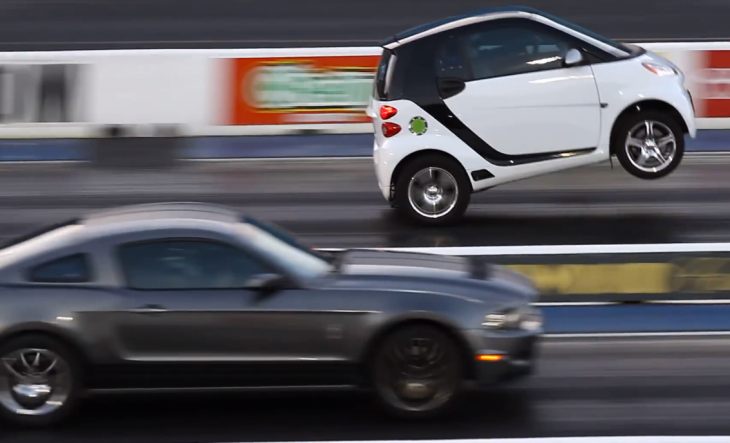 We do love it when you see the underdog getting one over on a larger beast, and while this is the case at the start of the video, where the Smart ForTwo takes an early lead, it is at the halfway point that things settle down and the Shelby Mustang reaches the finish line first.

I can’t help wonder if it would have been a different outcome if the Smart ForTwo never popped a wheelie at first, yes you read that correctly. The small car had so much power that it went up on its rear wheels, it was truly like watching the original Fast and Furious movie.

If this Smart ForTwo was to try the same trick on the 2015 Ford Mustang, then we suspect the outcome will be very different, as the new Ford has a new system called Line Lock, making it ideal for burnouts. This comes in handy in a drag race because you can generate plenty of heat on the rear tires so that the moment the lights go green you know those rear tires will be at the right temperature to offer greater traction off the line.