A few days ago there had been four Smart Cars tipped on their sides in the San Francisco Area and for some reason there seems to be growing concern for a Smart Car tipping epidemic, but it is far from one. The thing is, there has been no more reported cases, although when headlines appear it will not take long for it to catch on and images of these vehicles on their sides appearing on the likes of Facebook.

We would hate to think that Smart Car tipping could become the next necknomination, but so far it doesn’t look that way. We can’t say for certain why these four vehicles were tipped over, but our best guess is that alcohol was involved.

Police in San Francisco believe that six to eight individuals were responsible for these acts and as such are treating these acts as felony vandalism. This isn’t the first time that a Smart Car had been tipped over because it happened a couple of years ago, although this was an isolated incident. 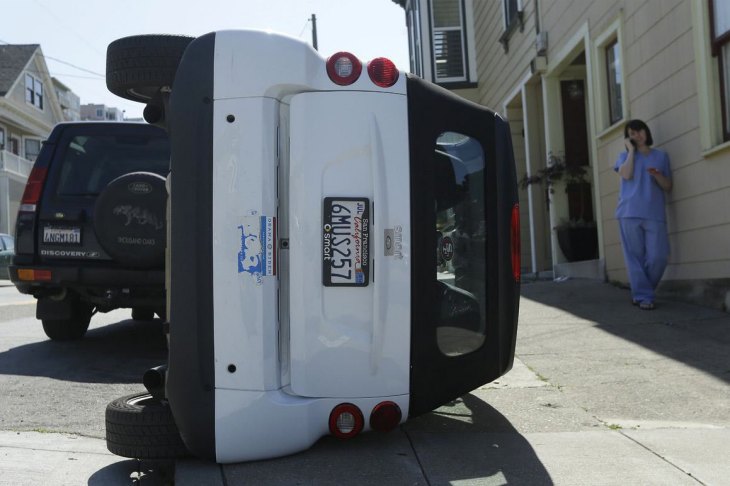 However, Amsterdam also suffered from a spate of crime that involved the small vehicle, as several Smart Cars ended up at the bottom of a canal.

Maybe this was the reason why many media outlets started to believe that this was a new epidemic, although in doing could have provoked people into making this the new craze?

It does make us laugh that these same media outlets suggest that a reason why these individuals resorted to tipping these cars over, was through sheer boredom. Now I’ve been bored on many occasions, but never thought the way to alleviate this was by going out and vandalize people’s property.

Do you think Smart Car tipping will become an epidemic, or do you think these four incidents were isolated?