At the end of April, we showed you a very cool video which demonstrated how Skyrim could be supported with the innovative new Oculus Rift virtual reality display viewer. Now, we have version two of that video, which combines Skyrim and Oculus Rift, with the addition of Microsoft’s Kinect camera for truly hands-free motioned controlled gaming.

The ending result is pretty spectacular as well we have to say. Chris Gallizzi is the developer who has made it all possible, with the video above confirming that it is indeed possible to connect Oculus Rift with Kinect, with a little tinkering around. It means that you don’t have to use a controller at all, with hand gestures now serving as your main magic and weapon use when roaming around Skyrim.

The video may look like an instant headache for some, but let’s not forget that we don’t get to see what the true perspective is like when actually wearing the Oculus Rift. This will only be possible at first-hand, but it looks like the dream scenario for those that really want a hands-free immersive experience at the game, although willing to pay a premium for it at the same time. 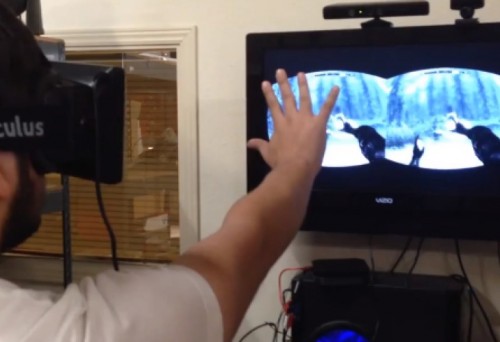 Just as a reminder, the Oculus Rift is nowhere near ready for public release yet, but some developers have early access to the product after paying $300 as part of a Kickstarter project. The video also lets you see how you can move forward on the game, simply by tilting your headset forwards. The user can also fully move around in 360 degrees without the use of a controller, while the lag when issuing commands to Kinect doesn’t appear to be troublesome either.

It’s early days yet, but are we looking at the best way to experience Skyrim in perhaps a year’s time when Oculus Rift is available to buy? No doubt Bethesda will be looking on with interest when they see this video.