This week saw a twist in the recent patterns of the UK games chart as Elder Scrolls V: Skyrim outsold Call of Duty: Modern Warfare 3, a task that seemed unlikely after the FPS spent four weeks at the top. It is thought that heavy discounts across the nation are the main cause for the RPG’s boost in sales and as a result MW3 now sits in second place despite record breaking overall sales.

As far as the multiformat chart was concerned, a Christmas number one for MW3 seemed inevitable and while it could still be the case no-one had foreseen the events of this week unfolding. Analysts also predicted that Just Dance 3 would also enjoy Christmas at the top when it comes to the individual formats chart this also still seems very likely despite the amount of discounted games during the festive season.

Overall sales of Ubisoft’s dancing game have risen 67%, 89% of which were sold on Nintendo’s Wii console putting it firmly at the top of the individual formats chart for now, and third in the multiplatform chart. Skyrim can now be purchased for as little as £22 in some stores which has helped the game’s sales rise by 145% as it takes the number one spot.

Other games which have experienced rises in their sales this week are Battlefield 3 and FIFA 12 while MW3 sales dropped 7%. Uncharted 3 is another game that has received discounts which has managed to boost its sales 81%, pushing its way back into the game chart’s top ten once more. You can check out the top ten in the multiformat chart as it stands at the moment over at The Sixth Axis, which also shows the percentage increase in sales each game has achieved.

Are you surprised to see Skyrim at the top this week? Which game do you think will be number one over Christmas? 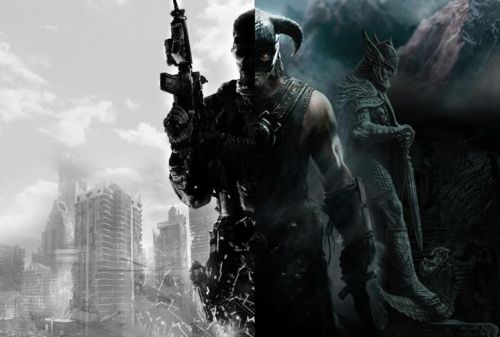