This is the news that PC owners have been waiting for, as we can confirm that Valve has just gone live with the Skyrim pre-load, allowing players who pre-ordered the game to download it early in anticipation of the big launch on Friday.

To clarify, this will not let PC players play the game early, but it will just let them play the game the exact moment that Bethesda makes the game available on PC. On Valve’s part, letting players pre-load the game in advance will ease the pressure on their download servers significantly, as you can imagine that as soon as 11.11.11 hits, the majority of ‘unaware’ Steam owners will be buying and downloading Skyrim at the same time and the download speeds are likely to be hit, causing frustration all round.

So that’s why pre-loading is great, and we’re guessing that most of you are already in progress of this at the moment. What download times has Steam given you to pre-load Skyrim, we bet the excitement is killing you in anticipation for the game?

For those of you that have pre-ordered the game but had no idea pre-loading is now live, head to the Steam page here to begin. On a side note, we’ve noticed that a lot of you are very surprised about the rather small 6GB install for Skyrim, as many of you obviously expected sizes reaching the heights of 15-20GB for the game, given the scope of previous games for example.

We’re not complaining though, it just means that you can get Skyrim installed quickly on your system – that’s not a bad thing is it folks! As for the exact time when the game goes live on PC, we’re guessing that it could be 12.01am on 11.11.11, although there’s some speculation that it could be going live at 11.11am in your respective region – which would be interesting.

Have you pre-loaded Skyrim already? What time do you expect the PC version to go live? 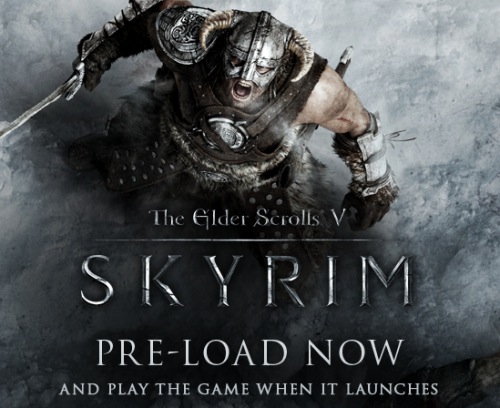