Following on from the massive announcement by Bethesda and the confirmation that mods are now on the way to PS4 users, we talk about the need for Bethesda to also confirm the Skyrim Remastered mod size on PS4 and Xbox One for fans as soon as possible.

With the game due out on October 28, fans will want to know where they stand exactly on what the file size limit is for Skyrim Remastered mods, as it could be important for those taking their modding very serious.

Skyrim was an amazing game when it launched and was followed up by some amazing mods on PC. We’ve learned that Sony will only allow mods on PS4 if they are making use of in-game tools, so hopefully at the same time they allow enough space for downloads to compensate. 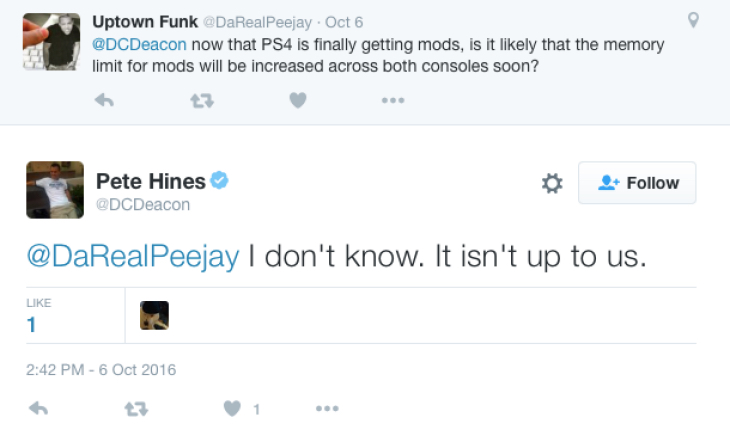 We can confirm though that this isn’t up to Bethesda it is up to Sony once again, so we’re assuming the same for Microsoft as well with regards to the Xbox One version.

Pete Hines has revealed this in a recent Tweet which you can check out above. Hopefully Sony will put an end to the confusion and confirm that the limit will be set to say 4-5GB which will be bigger than the 900MB previously available in the Fallout 4 beta.

Do you need to know the file limit for Skyrim Special Edition mods on PS4 and Xbox One as a priority? Let Microsoft and Sony know this below!