It looks like the situation for Skyrim players on PS3 has now turned a lot more positive, after the developer finally confirmed that Dawnguard and Hearthfire will be joining the release of Dragonborn on Sony’s console. What Bethesda is remaining silent on though, is the unveiling of the next DLC expansion pack, which is widely thought to be called Redguard and due for imminent release soon.

Pete Hines is well known for being the company’s communication man and he regularly replies to user’s questions on the status upcoming DLC releases for Skyrim. He has taken the full force of disgruntled fans during the missing Dawnguard crisis, but now it looks like users are beginning to cut him some slack after the news of Dawnguard’s upcoming release.

In some of his recent Tweets, users have been asking him for the exact release date for when Dawnguard will be out. Bethesda has previously only committed to releasing the content sometime in February, but now he has revealed that the company are ‘waiting’ for Sony US and Europe to hear back on an exact date for the missing packs.

Does that mean Dawnguard, Hearthfire and Dragonfire are all finished and ready for release on the PS3? In other Tweets from Mr Hines, he has not been thrown off by fans attempts to get him to reveal information on Redguard. When asked to ‘confirm or deny’ Redguard, Hines said he would do neither and added that fans are making up stuff or ‘guessing’ just to get him to comment. 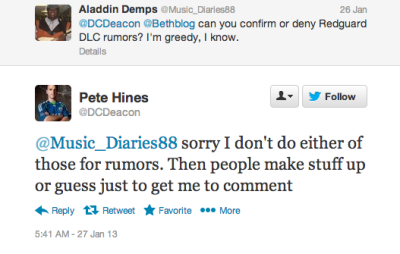 Considering the Redguard name has already been trademarked just like the previous expansion pack names before it, we feel that it is only a matter of time before the secret finally gets out. The big question on our minds is whether Microsoft has renewed their deal with Bethesda, to make Redguard exclusive to Xbox 360, or if it will have a simultaneous release on all platforms for the very first time.

Are you getting excited about Redguard? What has been your favorite Skyrim expansion so far?