We recently informed you about some of the glitches that have been discovered in The Elder Scrolls V: Skyrim, as there’s bound to be a few as you can imagine from a Bethesda game. Now though, we have a collection of some of the easter eggs that have been spotted in the game.

The most evident one that a lot of you have been talking about is the Minecraft easter egg that has been spotted in the game. If you head to the Throat of the World, on the highest point you will come across an item known as the ‘Notched Pickaxe’. For those of you that don’t play Minecraft, the pickaxe is the primary tool in the game, and Notch aka Markus Persson is the creator of the game of course. We find this easter egg particularly awesome as it shows that Bethesda still has a lot of love for all things Minecraft, despite the recent legal battle between the two franchises for use of the word ‘scrolls’.

Back to the easter eggs though and it looks like there are also crazy references to Star Trek, Monty Python, The Headless Horseman and even Alice in Wonderland, as detailed by Gamefront. Fans will be delighted to hear that everyone’s favorite daedric prince Sheogorath is back in Skyrim, and once you find him, you’ll see that he is having a tea party with a dead man in the middle of a forest – as one does. After you have listened to him for a while, he’ll give you the famed Wabbajack staff, which also featured in Oblivion. Rather than transform enemies though, we’re hearing that the Wabbajack in Skyrim can deal shock, ice or fire damage at random.

You just know that there are bound to be plenty of references to Oblivion as well, so perhaps these are not true easter eggs as such, but we can tell you that you can summon a ghost version of Lucien Lachance, who you’ll probably remember as one of the main members of the Dark Brotherhood in Cheydinhal. There’s also been sightings of giant mudcrabs, as well as the return of the ‘The Lusty Argonian Maid’ book from Oblivion as well. 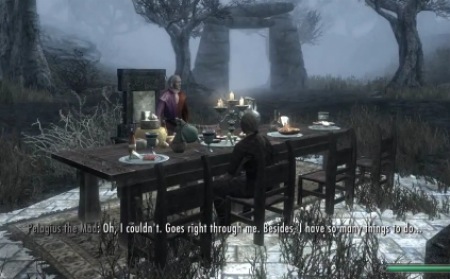 Have you found all of the easter eggs above, which one would you say is the best so far – Sheogorath has to be up there surely? If you have found any other great easter eggs in Skyrim, let us know your discoveries below as there is bound to be more. On a side note, if you need help curing lycanthropy, click here.