We are just days away from the highly anticipated release of Dragonborn, the next DLC expansion pack for The Elder Scrolls V: Skyrim. Bethesda has not said anything regarding the missing PS3 Dawnguard content yet which is obviously disappointing, but those with an Xbox 360 may be interested to read through a vast list of new information, which has apparently been leaked before release.

This information contains many juicy details about the upcoming DLC pack, including a list of new Dragon Shouts, achievements that can be unlocked, new weapons and armor, new spells that can be learnt and also the new locations that Dragonborn will see your player travelling to.

This is obviously very spoiler orientated, so if you are planning to pick up Dragonborn on Xbox 360 from day one, you may want to look away so potential surprises are not spoiled. For PC and PS3 users though, this information could be more worthwhile to you, as Bethesda still hasn’t confirmed if Dragonborn will be coming to these platforms or not.

With that in mind, you can read through the entire leak here and decide for yourself whether you are interested in picking up the pack for $20 and if it seems worth it or not. Looking through the list of new weapons and armor, we again see a confirmation that Bonemold armor will be available in Dragonborn, while there will also be something known as Deathbrand Armor as well, which sounds particularly powerful. 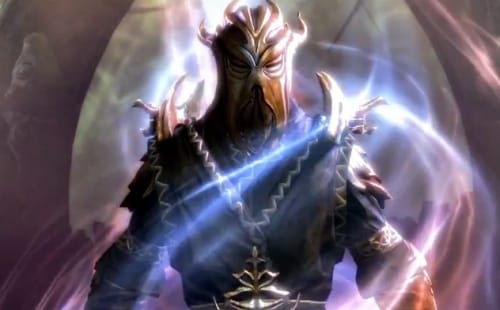 There are also hints of a new summoning spell that will be available, but the person responsible for the leak hasn’t revealed what it is, as they want players to see it for themselves. On the subject of Dragon Shouts, the leak reveals that there is at least five new powers to obtain – one of them by the name of Dragon Aspect that will allow you to create dragon armor and summon a dragon to help you in battle with increased stats as well, but can only be used once per day.

All this information is obviously still deemed rumors as it hasn’t come from Bethesda, but then again the developer has given no information other than the trailer on what the DLC entails, so perhaps this leak is just what potential buyers are after. View the whole thing courtesy of TheOutHousers and let us know what you are most excited about, based on the information they have provided – there are even some gameplay screenshots from Dragonborn to take a look at as well.

For PC and PS3 owners reading this – do you desperately want to get your hands on Dragonborn now? It could end up as the best Skyrim DLC expansion so far – not that PS3 users can have a say on this.