As we told you in our earlier article, the Golden Joystick Award winners have been announced and aside from GTA V being named as the ‘One to Watch’ winner, there’s no surprise to see that The Elder Scrolls V: Skyrim also took home a few awards, including arguably the biggest award of them all.

To fill you in, Bethesda scooped the most awards for a single game, winning three awards in the categories for Game of the Year, Best Gaming Moment and also Best RPG. The developer will obviously be pleased with yet another GOTY title after their success at the 2012 VGAs, but there may also be a bit of disbelief in the air from PS3 owners, who are surprised that the game is still picking up awards despite being dragged through the mud, with regards to the still missing infamous Dawnguard DLC expansion on the PS3.

As you can imagine, Pete Hines has been on Twitter again, expressing the company’s pleasure at picking up the new awards, but still found time to reply to yet another user query, asking him for any updates. Again unsurprisingly, there is still no official word or status update on the official PS3 release date for Dawnguard, leaving users still pondering whether Bethesda has truly given up on the missing content, or if they are taking a page out of Rockstar’s books and just deciding not to say anything at all. 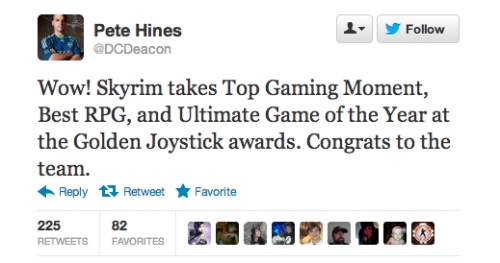 The trouble there is that Rockstar can afford to do that, as they have the assurances of millions of gamers. Does Bethesda have the same luxury after all of the negative feedback towards Skyrim though? At the end of the day, PS3 gamers have put hundreds of hours into the game, under the assumption that their adventure would be continuing through official DLC support after release. It hasn’t happened though and there’s no excuse at the moment why it shouldn’t be available on two platforms and not the other.

Congratulations on the awards Bethesda, but would a tiny update on how things are progressing be too hard too ask we wonder? Let us know your thoughts on the agonizing wait for Dawnguard and whether there’s an element of frustration there on hearing that the game is still picking up awards.