After a few weeks of silence it seems that Pete Hines has broke cover in regard to Skyrim Dawnguard on PS3, and in fact the chance of seeing any DLC arrive, which came thanks to some persistent users asking questions on Twitter. These include direct questions about what problems exist with getting Skyrim Dawnguard and Hearthfire onto the PS3?

Hines answer to gamers wanting insight — when asked what the problem is, he simply said “hasn’t changed” and directed gamers to a link back from the end of August, which we’re sure you remember as seen here. You can see his tweet below, although it doesn’t answer what the issues are or questions about the lack of communication. This depth of feedback mixed with constant silence is the very reason some people are extremely frustrated in the first place, and PS3 users wanting Skyrim DLC can’t even get an answer if there would ever be a release date, or insight into the what the issues are. 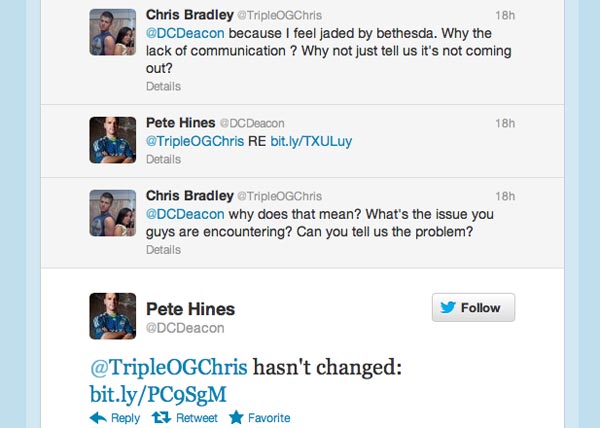 Pete Hines is a PlayStation 3 user – When some people accused Hines for hating PS3 users, he had this to say, “I am a PS3 user“. Did you know that the VP of PR for Bethesda is a PS3 user? We bet he still gets to play all Skyrim DLC, including Dawnguard? The very reason Hines is trying to keep users calm might hint that they will bring DLC to the PS3 at some point, but keeping the finer details secret is also very strange.

Some of our readers wonder why Twitter and Hines are the medium of communication with Bethesda, which might have been explained in another tweet recently. Yesterday Hines said, today is “the start of my 14th year at Bethesda” and interestingly he pointed out that when he started it had been just him. You can see this confirmed in the tweet below, so this would show why Hines has taken the job as point of contact for the lack of Skyrim Dawnguard on PS3.

Do you think Bethesda should offer much more than just Pete Hines on Twitter, especially when it comes to communicating the problems with getting Skyrim Dawnguard on PS3?