Over the last few days we’ve managed to find some time for Skyrim Dawnguard, and in the coming weeks we’ll feature a few of the quests after some hands-on time with the Xbox 360 and PS3 versions. Our Dawnguard review will be covered over a number of articles, which most of these articles can be found via this page with other news. Today we wanted to explain a little about the Prophet quest in Skyrim Dawnguard and this involves your search for a Moth Priest.

You can find a video below this article detailing the Prophet quest with a visual walkthrough, although we have included a quick run through with our experience of this quest. You can see a screenshot above that we took while playing the Dawnguard DLC, although this had been taken after you meet back at Fort Dawnguard with the Moth Priest. If you don’t want to read or watch spoilers then stop now, or leave a comment after the video.

After investigating the scene of an attacked carriage you’ll find a vampires note (seen in the image below) that explains the Moth Priest you are looking for has been taken to Forebears Holdout, which is where you need to go for a rescue quest. Once inside you’ll have to beat a few vampires before finding the Moth Priest, he is inside some sort of magic barrier, which is pretty easy to deactivate after finding the item you need on one of the vampires you defeated.

The fun doesn’t end right away thanks to the Moth Priest wanting to fight you; although once you defeat him he will befriend you. As usual you need to report back to Fort Dawnguard after this quest, and the Moth Priest will also meet you there. Watch the 24-minute video below for some gameplay of this quest, and also how to complete it step-by-step. 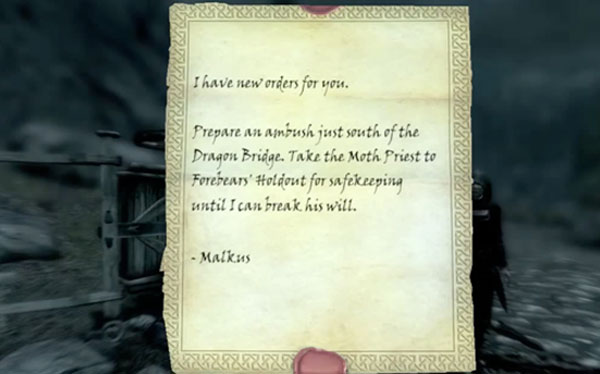 If you have been playing Dawnguard, do you think Skyrim’s first DLC is worth the money? You can also read about Serana and some gamers affection for her in this article, and more about the Legendary Dragons here.