We have seen some amazing and very useful mods released so far for the PC version of Skyrim, but perhaps we have one mod that tops them all. You may be familiar with this mod from Oblivion, but now the famous Buster Sword from Final Fantasy VII has been brought into the world of Skyrim as well.

If you have not installed any mods yet for Skyrim but have always wanted to, then we have a feeling that the buster sword mod for Skyrim will do a great job in tempting you to join the awesome customized world of Skyrim.

The mod has been created by DemonZariche and as mentioned above, it was originally made for Oblivion but has now been altered and given support for it to work in Skyrim. It looks and acts just how you would expect as well, a big huge beast of a blade which can be utilized in Skyrim for either one handed or two handed gameplay. The sword looks incredible in Skyrim and will instantly send waves of nostalgia running through your body when you see the Buster Sword in idle mode resting on your back – just like Cloud’s iconic pose from FF7 when he is overlooking the Shinra headquarters.

If you are interested in adding this to your PC version of Skyrim, then you’ll find the download link and instructions over at SkyrimNexus here. Don’t forget that the Creation Kit has still not been released for the game yet, with Bethesda still promising that the kit, along with Steam Workshop tools will become available before the end of January. For console owners, more specifically PS3 users, patch 1.4 is also on the way which promises to finally provide a fix for the lag and framerate problems that have plagued PS3 owners since launch.

For those of you who have already installed the Buster Sword mod though – let us know your thoughts on it. Would you recommend others to try this out? Being the huge FF7 fans that we are though, this is a no-brainer for us. 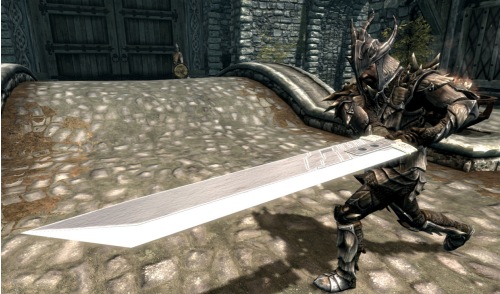