If you love the Elder Scrolls then there is a good chance you’ve seen the notes for Skyrim patch 1.5, although those of you that haven’t can see the main bug fixes and new features below this article. It’s good to see a lot of fixes for problems many of us have experienced, but we know there are some major quest issues still not fixed with the Skyrim 1.5 update.

Major issues unfixed after this patch — every gamer puts a different level of importance on each fix, which obviously comes from how much the problem is affecting their experience with Skyrim, although when it comes to completing quests nothing can be more frustrating than not being able to finish them. In some cases not being able to complete a quest is due to bug and not the way developers intended the game to work, and this becomes a bigger problem when uncompleted quests have not been fixed after a number of Skyrim patches.

It’s worth pointing out that some people might be unable to complete certain quests, while others don’t have problems with them same quests. We’ve heard from a few of our readers about problems with quests, which we’ve listed a few on this page. Feel free to share any problems you have competing quests in the comments, although please keep them related to bugs and let us know what system you’re on considering the PS3 and Xbox 360 are yet to receive patch 1.5.

We’ve heard about a glitch that traps certain gamers in Geirmund’s hall when trying to complete a quest to find a copy of “War of the First Council“, which seems to be related to the pillar’s not turning. There have also been a number of gamers that are stuck at the Iron Claw Door when trying to complete the “Evil in Waiting” quest; they state it’s broken.

When certain quests are broken it can be related to separate quest strings, and these issues can be replicated in different areas of Skyrim. We’ve managed to find bugs with the Dark Brotherhood quest line at “With Friends Like These“, and also during the main quest when doing “A Blade in the Dark“, and with “Blood on the Ice“. The amount of emails we’ve had about the main quest being broken are numerous, but it’s worth pointing out certain issues and bugs can be just something you did that caused that problem, which can be as simple as killing someone you should’t have.

Have you found broken Skyrim quests after installing patch 1.5?

Related Stories – You might want to read some of our recent articles on a possible name for the Skyrim DLC and the fact that we want DLC without major issues. 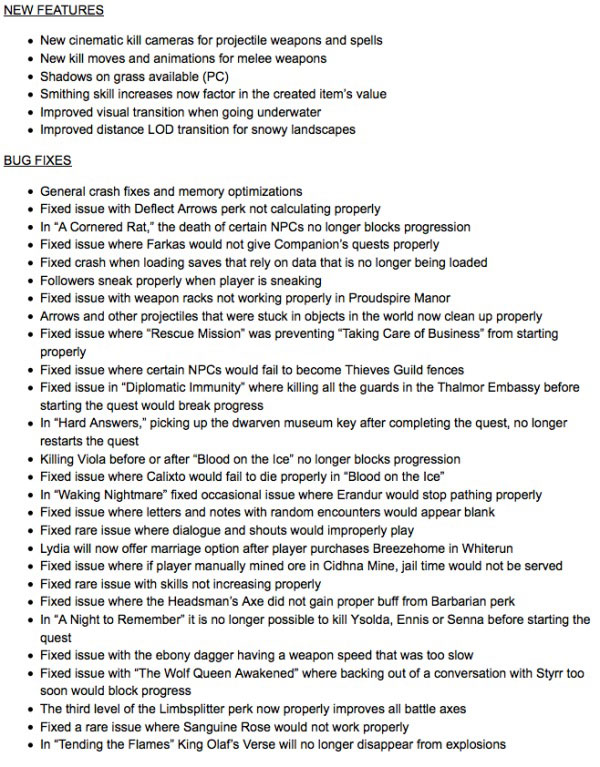